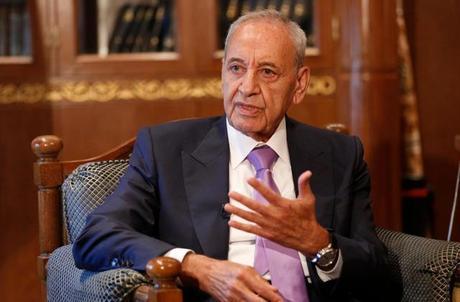 Speaker Nabih Berri on Wednesday urged President Michel Aoun to put the efforts needed in order to impose the State’s control in the cumbersome northern region of Bekaa, criticising years of “idleness” and attempts to “distort” its image.

“Our people in Bekaa need a State to carry its identity,” said Berri in a statement.

“Attempts have been going on for years to distort the image of Bekaa and showing it as seeking to escape the rule of law. All of that was happening while Lebanon was watching. What is the main goal behind all of this?” Berri asked.

The Speaker also said: “It is not convincing that the security apparatuses, the Lebanese army and State are unable to arrest the outlaws.”

Security conditions occasionally deteriorate in the Bekaa district of Baalbek-Hermel where reports of crime, theft and gunfire are not uncommon. Residents of the area have long demanded a solution for the rampant chaos in their city.

Conditions deteriorated further in May and reports of shootouts, and revenge operations --a phenomenon that tribes cling to as one of the old customs-- were reported.

On Wednesday, media reports said the Lebanese army was preparing a strict plan for the region to put things into order.

Nobody is Mr. Berri. The truth is your image is that of criminals, thugs, thieves, kidnappers, drug dealers and below all terrorists.

they've had political cover for their crimes from Hizbalot narco terrorist and the Amal lice...

Nouh Zoaiter is a commander in nassrallah's iranian terrorist resistance.

Kamen, Lebanon is full of such “heroes”. They are at the core of the resistance, as in resisting arrest.

What is there to distort? the filth that you are?

Start paying your bills, burn your illegal crops, stop steling cars, hand in your illegal guns, stop blood revenge traditions and treat you women nice. After that Im sure that your image will improve....