S. Korea's Moon Arrives in Russia for Talks with Putin 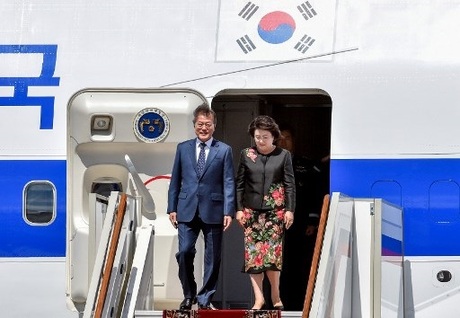 South Korean President Moon Jae-in arrived in Russia Thursday ahead of talks with his Russian counterpart Vladimir Putin, which are expected to focus on economic cooperation and the situation in North Korea.

Moon will meet with Putin on Friday when a number of joint documents will be signed, the Kremlin said.

Deputy Foreign Minister Igor Morgulov said three-way talks with North Korea would be discussed during the state visit, as well as economic ties, in comments reported by Russian news agencies.

During his three-day visit, Moon is also expected to watch South Korea's World Cup match against Mexico on Saturday in the city of Rostov-on-Don.

Earlier, Russia's Foreign Minister Sergei Lavrov said he had discussed "points that inspire some optimism" with regard to the situation in North Korea with U.N. head Antonio Guterres during the latter's trip to Moscow.

Putin last week said he would be happy to welcome North Korean leader Kim Jong Un to Russia, suggesting they meet during an economic forum in the far eastern port city of Vladivostok this September.

This month Kim and U.S. President Donald Trump made history with a summit in Singapore -- an unprecedented encounter that saw the two leaders shake hands.