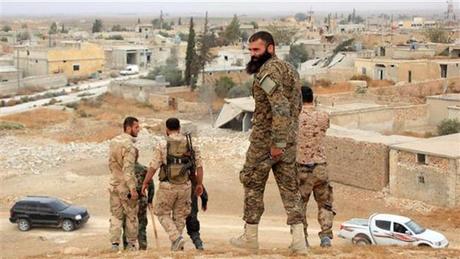 Syrian regime forces on Saturday made their first gains on the ground against rebel fighters in the southern province of Daraa after several days of intensified bombardment, a monitor said.

Since Tuesday, regime troops have been ramping up shelling on opposition-held areas in Daraa's eastern countryside ahead of an apparent military offensive against rebels there.

"Regime troops made their first advance in the area since the military escalation on Tuesday, seizing the villages of Al-Bustan and Al-Shumariya in the eastern part of Daraa province," said the Syrian Observatory for Human Rights.

The shelling and clashes are currently focused on a wedge of rebel territory between Daraa's eastern countryside and the western part of the neighbouring province of Sweida.

The army seems to want to split that wedge into a northern and southern section, Observatory head Rami Abdel Rahman said, "to facilitate their operations and increase the pressure on rebel factions, allowing it to advance more quickly."

After securing the capital Damascus, Syrian troops have turned to the country's south, where rebels still hold a majority of the provinces of Daraa and Sweida.

Southern Syria is a particularly strategic zone: it borders both Jordan and the Israeli-occupied Golan Heights, and also lies close to Damascus.

Military reinforcements have been streaming into the south, despite it being designated a de-escalation zone last year where violence is supposed to be reduced.

The Observatory has noted an "ongoing escalation of shelling and clashes in eastern and northeastern parts of Daraa province."

The regime has used air strikes and artillery and has even resumed dropping notorious barrel bombs on Daraa province.

Barrel bombs slammed into the town of Al-Herak on Friday in the first use of the weapon on Daraa in nearly a year, according to the Observatory.

The escalation has left at least 17 civilians dead since Tuesday across rebel areas, according to the Britain-based monitor.

Some 12,000 people have been displaced from Daraa province in recent days, the Observatory said.

The United Nations has also warned that increasing violence is putting the lives of 750,000 people in rebel parts of the south at risk.

Even as the regime hints at a looming assault, talks between international brokers may see a negotiated settlement for Syria's south.

ironic a shia khomeinist mouthing off at salafis.

Yes, because it is usually the Salafis mouthing off at Shia people right.