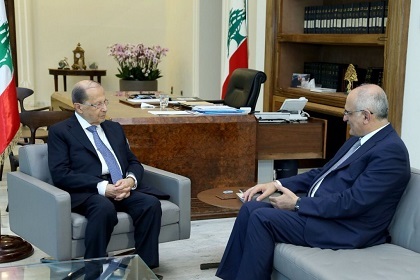 President Michel Aoun on Saturday held talks with Finance Minister Ali Hassan Khalil at the Baabda Palace where talks focused on the financial and economic situation and the preparations for the upcoming 2019 State budget, the National News Agency reported.

“I have briefed the President on the international reports regarding the country's monetary and financial situation, which reflected a general stability despite the difficulties Lebanon is facing,” said Khalil after the meeting.

He did not elaborate on the subject, but stressed the need to “speed-up the government formation to meet the existing challenges,” he said.

Commenting on the Syrian refugees' file, Khalil assured that "Aoun has the full backing of AMAL Movement in this context,” noting that it has been expressed earlier through AMAL chief and Speaker Nabih Berri.