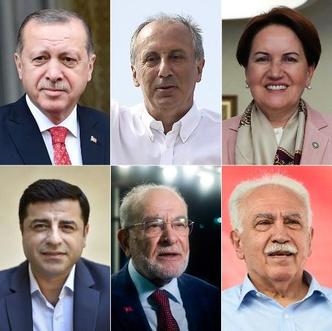 Six candidates are in the running for the Turkish presidency in Sunday's election, including current President Recep Tayyip Erdogan.

In a tight contest, Erdogan will want to win a new mandate in the first round but the opposition could force a run-off on July 8.

Here are profiles of the six candidates:

The former semi-professional footballer served as Istanbul mayor from 1994 and was credited for dramatically improving the megacity's transport and refuse problems.

But his term as mayor was cut short when he was convicted for reading a poem deemed Islamist and he was imprisoned for four months in 1999.

Law changes allowed him, despite the conviction, to become prime minister in 2003 after the AKP broke the mold of secular-dominated Turkish politics.

Erdogan has since transformed Turkey by allowing religion to play a greater role in public life, spearheading major infrastructure projects and pushing a more assertive stance on the international stage.

Slogan: "A president for all of us"

With rhetorical skills to rival Erdogan, Ince has rapidly emerged as the main challenger to the president.

He has served as a famously raucous lawmaker for his home city in northwestern Turkey, Yalova, for 16 years. The former physics teacher twice unsuccessfully ran against CHP leader Kemal Kilicdaroglu but the CHP boss backed his candidacy.

Ince, popular among CHP members, has energised the party's base as he criss-crossed the country. But he has also sought to broaden its traditional support to leftists and also Kurds.

He is the author of four books, including a book of poetry.

Aksener, the only female candidate in the race, served as interior minister between 1996 and 1997 and later as deputy parliament speaker. She was a close aide to Turkey's first and only female prime minister, Tansu Ciller.

Aksener later joined the right-wing Nationalist Movement Party (MHP) but was dismissed in 2016 after trying to oust the leader, Devlet Bahceli, who has since formed an alliance with the AKP.

Aksener then in October 2017 launched Iyi (Good) Party with former MHP members. The party shook up Turkey's nationalist scene although her profile has been eclipsed by Ince.

Demirtas, a Kurd, has the unwanted status of being Turkey's first and only presidential candidate running for office while in jail.

It was during that campaign the charismatic politician was dubbed a "Kurdish Obama" by the Western media after the former US president.

But he was jailed along with 11 other HDP MPs in November 2016 over alleged links to the outlawed Kurdistan Workers' Party (PKK), blacklisted as a terrorist organization by Ankara and its Western allies. He denies the charges.

Karamollaoglu, educated at Manchester University, has led the Felicity (Saadet in Turkish) Party since October 2016.

The veteran politician worked closely with the former Islamist premier and Felicity founder Necmettin Erbakan -- who was also a mentor to Erdogan.

He was an MP for the Islamist Welfare ("Refah") Party -- which Erdogan was also a member of -- until it was shut down by the authorities. But Erdogan and his cohorts then went to form the AKP, leaving Saadet as the rump of Erbakan's movement.

Perincek is an eccentric veteran of Turkish politics. His leftwing nationalist Patriotic ("Vatan") Party, formerly known as the Workers' Party, was set up in 1992 before the name change in 2015.

He has been jailed multiple times, including after the 1980 military coup and over the shadowy Ergenekon plot which allegedly wanted to topple the AKP government. Scores of such convictions were later overturned.

He is regarded as the most marginal of the candidates.