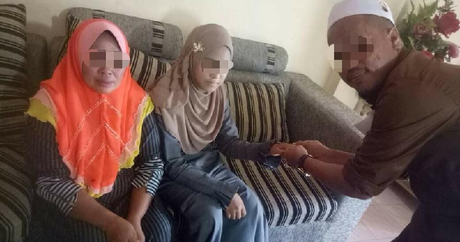 The marriage of a Malaysian man with a 11-year-old Thai girl has sparked outrage in the Muslim majority country with one activist Sunday labeling the groom a "child predator."

Malaysian Muslims below the age of 16 are allowed to marry if they obtain the permission of a religious court.

But the country's women and families ministry said there was no record of religious authorities approving the union, which took place last month across the border in Thailand's largely Muslim far south.

"Our officers have gone to the house and met the girl's mother. We are waiting for more reports before deciding on the next course of action," deputy prime minister Wan Azizah Wan Ismail was quoted as saying by the Sunday Star newspaper.

The 41-year-old husband could be jailed for six months if he married without permission.

Malaysian activists have called for law reform to end child marriage, which they said was widespread among the country's Muslim population.

Some 16,000 Malaysian girls below the age of 15 are already married, advocates claim.

"Marrying a 11-year-old girl is like the behavior of a child predator or pedophile," child activist Syed Azmi Alhabshi told AFP.

Alhabshi said the man was a prosperous trader and already married to two women while the girl's parents were impoverished rubber farmers.

Muslim men are allowed to take up to four wives in Malaysia.

The United Nations children’s agency UNICEF said it was "outraged" by the incident.

"It is shocking and unacceptable. UNICEF... calls on the government to make good its manifesto promise to ban child marriage," said the agency's Malaysia representative Marianne Clark-Hattingh.