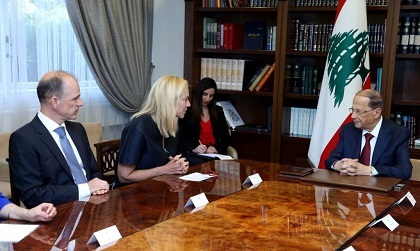 Dutch Minister for Foreign Trade and Development Cooperation Sigrid Kaag held talks Monday in Baabda with President Michel Aoun and noted that Lebanon can play a key role in the region and in Syria's rebuilding process.

Kaag served as the U.N. special coordinator for Lebanon from January 2015 until October 2017.

The Dutch official congratulated Lebanon on the success of the parliamentary elections and the looming formation of a new government, noting that her country wants to boost cooperation with Lebanon in several fields, especially in the economic and agricultural sectors.

Aoun for his part told Kaag that the new government will give special care to the economy and will “continue the campaign against corruption.”

He also welcomed any cooperation between Lebanon and the Netherlands in all fields, thanking Amsterdam for its participation in international Lebanon support conferences.