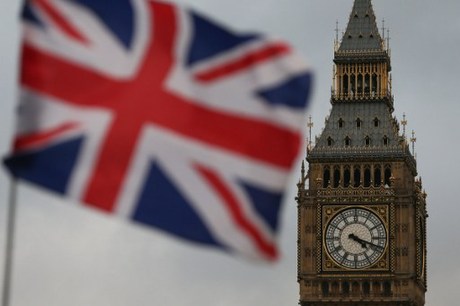 May faced a crisis in her cabinet on Monday after Brexit minister David Davis and one of his deputies resigned over the plan drawn up ahead of the weekend.

British business, whose leaders have persistently called for a clear plan on Brexit, came together Monday to back May's proposals.

"It is welcome that the cabinet set out an agreed position for the UK's future relationship with the European Union," said Catherine McGuinness, head of policy at the City of London Corporation, a local government authority for the capital's financial district.

However in a note of caution she said "a deal that excludes services... could have a negative impact on the UK's financial sector."

Despite a divided cabinet, May on Friday won overall support at her country retreat for a new "free trade area" where Britain would accept EU rules for goods.

Speaking Monday to the BBC, the head of Britain's main business lobby group the CBI, called the resignation of Davis "a blow" to the plan.

But at the same time, Carolyn Fairbairn said the government was moving "in the right direction."

She added: "There will be a time when the benefits of free trade deals internationally could outweigh European trade, but it's not yet.

"Our argument is unless and until you have an alternative way of reaching frictionless trade, a customs union is the right answer so we think broadly this is going in the right direction."

And in a statement on Davis' replacement, euroskeptic junior minister for housing Dominic Raab, Fairbairn said:

"There's a tough job ahead and business is ready and willing to support him and his team... deliver a good Brexit at such a critical time for the country."

May's proposals are for "a common rule book for industrial goods and agricultural products."

They additionally call for "a new business-friendly customs model", which would maintain high standards but allow Britain "to strike new trade deals around the world" once it has left the European Union in March next year.

The government believes that plan would allow Britain to maintain frictionless trade with the EU in goods, avoid customs checks on the sensitive Irish border, and end both free movement of people and jurisdiction of the European Court of Justice in Britain.

"In the meantime, we hope that the EU will respond to these proposals in a constructive and considered manner," he said in a statement.

"Both sides must now seize this opportunity to put the interest of citizens and customers across Europe firmly at the heart of the process," Celic added.

Leading up to last Friday's cabinet agreement, top European manufacturers including Airbus and BMW warned about the possibility of pulling major investment out of Britain over Brexit uncertainty.

But in trading on Monday, both the pound and London's benchmark FTSE 100 stocks index rose, with investors welcoming the fact that Britain could be heading toward a so-called "soft" Brexit.

"A soft Brexit refers to a less hardline approach to the UK-EU separation which would ultimately see the future relationship between the two parties more closely resemble the current arrangement," noted analyst David Cheetham at brokerage XTB.

"From a market perspective this is deemed favorable for the pound as it would see less disruption and uncertainty as far as the outlook for the UK economy is concerned."