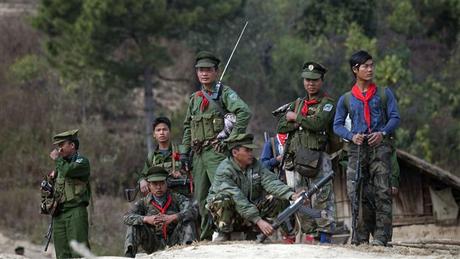 Myanmar military officials on Wednesday said stalled peace talks were "drowning" the country, blaming ethnic armed groups for the fighting that continues to rage in the country's northern borderlands.

Civilian leader Aung San Suu Kyi has said that making peace is a top priority for her administration, but she shares power with the military, which has fought ethnic insurgencies for decades.

At the start of a third round of Suu Kyi-led peace talks in the capital Naypyidaw Wednesday, Myanmar's commander-in-chief Min Aung Hlaing suggested ethnic groups were responsible for the stalled peace process that he said was "drowning our country".

"I would like to urge you to wipe out the civil armed conflicts that hinder the development of the country," he said.

"If their people have no discipline, problems can happen," he said.

The six-day peace talks are an attempt by Suu Kyi, who came to power in 2016 after landslide elections, to bring more ethnic groups into a ceasefire accord.

Ten groups are now signed up but at least seven, including some of the largest and most influential, are holding out, with Suu Kyi saying Wednesday they were "always welcome" to join.

Progress has been hampered by continued clashes between the powerful military and armed insurgents fighting for more autonomy in northern Kachin and Shan States.

The grinding conflicts play out away from the more prominent global headlines generated by violence in the country's west, where the army has driven out some 700,000 Rohingya Muslims since August.

More than a third of Myanmar's townships are affected by unresolved conflict, according to a 2017 report from the Asia Foundation.

Some of the fiercest clashes are happening in Myanmar's northernmost Kachin State, where more than 100,000 people have been displaced by violence.

Kachin Independence Army General Gunmaw told reporters as he arrived at his hotel Tuesday that one of the aims of the conference was to restore basic communication channels with the government.

"We hope fighting will be decreased."