US Ambassador Plays Down Trump's UK in 'Turmoil' Comment 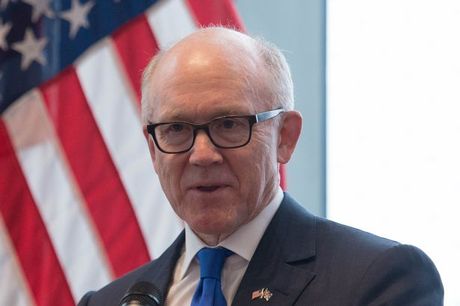 US Ambassador to Britain Woody Johnson on Wednesday rowed back on President Donald Trump's comment that Britain was in "turmoil" because of Brexit-linked political upheaval.

Asked on BBC radio about Trump's comments ahead of his trip to Britain, he said: "There's always turmoil in every country but no, no, I think the UK is proceeding as it always does.

"It's a very confident country, it's a very capable country. We're extremely confident in the ability of the UK to plough through this issue with Brexit and move on," he said.

He said May was an "amazing leader at this point where she has a fragile leadership, and being able to get through these issues the way she has is an example of strong leadership".

The Sun, Britain's most popular paper, said Trump's comments were a new blow for Prime Minister Theresa May, who has faced two high-profile resignations from her cabinet and a rebellion by Brexit hardliners this week.

"Donald Thump!" read the tabloid's front-page headline after the president told reporters that Britain was "in somewhat turmoil" and that the summit with Russian President Vladimir Putin may be the "easiest" part of his European trip.

Asked if May should stay in power, Trump said "that's up to the people".

Trump is expected to face major protests during his trip to Britain, including a giant inflatable image of him as a crying baby to be flown near parliament on Friday.

Asked about the balloon, Johnson said: "It's really kind of irrelevant to what we're trying to do and it certainly doesn't express the point of view of the British people I've met".

"I maybe will speak to him when I get over there," said Trump, who arrives in Britain on Thursday and is set to hold talks with May and meet with Queen Elizabeth II on Friday.

Ambassador Johnson said he would facilitate a meeting between Trump and Boris Johnson, who is seen as a potential challenger to May, telling BBC radio: "If the president wants to do that and he feels it's appropriate, he'll make that decision."