Syria's Daraa, Cradle of the Revolt 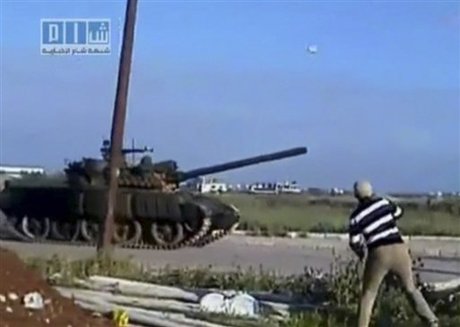 Syria's southern province of Daraa is the birthplace of the 2011 anti-government uprising that became a devastating seven-year war, with parts of the region falling into opposition hands.

However deals with rebels to hand over their heavy weapons signal the full return of the province to government forces, which raised the regime flag in the provincial capital Thursday.

Here is some background about the region, which is south of Damascus and borders Jordan and the Israeli-occupied Golan Heights.

In early March 2011, following the outbreak of the Arab Spring revolutions in Tunisia and Egypt, around a dozen youths scribbled slogans hostile to President Bashar al-Assad on a school wall in the provincial capital, Daraa city.

Authorities reacted harshly, jailing them and, according to activists, torturing them.

It was the spark of an unprecedented uprising.

On March 15, the first demonstrations for "a Syria free of tyranny... without corruption or theft or monopoly of wealth" erupted in Damascus, 100 kilometers (60 miles) north.

The demonstrations in Daraa were first directed against the government's economic policies.

The Sunni Muslim city, which had 75,000 residents before the conflict began, had fallen into poverty, worsened by a years-long drought that had prompted a rural exodus.

Protesters attacked symbols of the regime, including telecoms company Syriatel, in which a cousin of Assad is a majority stakeholder.

On March 23, 2011 security forces killed at least 100 people in Daraa city, according to activists and witnesses.

Assad fired the unpopular town governor and intelligence chief but failed to calm the unrest.

On April 26 the army was sent in and Daraa's protest movement was crushed after a 10-day military operation that saw hundreds arrested.

Daraa became one of the last bastions of Syria's armed rebels who started losing territory after Russia stepped into the conflict in 2015 to support the struggling government.

Different opposition groups controlled nearly 70 percent of Daraa province and also southern parts of its capital before a government offensive launched in June.

Having seen regular clashes between regime forces and insurgents, the province was covered by a July 2017 ceasefire brokered by Russia, Jordan and the United States.

It was also one of several "de-escalation zones" established by regime allies Russia and Iran and rebel backer Turkey.

The regime turned its sights on Daraa after the April 2018 fall of the rebel enclave of Eastern Ghouta, on the outskirts of Damascus.

On June 19 military planes dropped flyers on the rebel-held half of Daraa city calling on residents to expel "terrorists."

The same day they launched an offensive, backed by their Russian allies, on rebel-held areas of the province.

The assault pushed more than 320,000 people to flee their homes.

While pounding Daraa city, the government was able to retake parts of the province, notably the vital Nassib crossing on the Jordan border that it reclaimed on July 6 after three years under rebel control.

Also on July 6 the regime reached a ceasefire deal with rebels who agreed to surrender the remaining parts of the province in their control.

On July 11 opposition fighters in Daraa city agreed to hand over their heavy weapons or evacuate.

Even before these measures were implemented, a convoy of Russian military police and regime officers entered the city Thursday and raised the national flag.

Now it is their cradle of defeat.