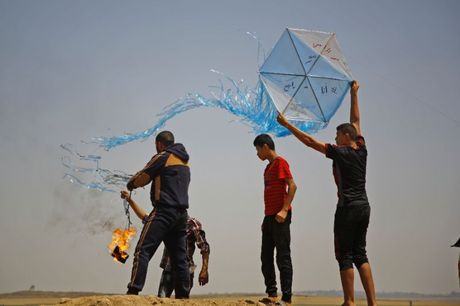 Israel tightened its blockade of the Gaza Strip on Tuesday, partly over kites carrying firebombs to set alight Israeli farmland, as concerns mounted over whether the rudimentary devices could spark another war.

Days after the heaviest exchange of fire between Israel and Palestinian militants in Gaza since a 2014 conflict, Israel said it was blocking until Sunday fuel deliveries to Gaza through its only goods crossing with the enclave.

The fishing zone enforced by Israel off the Gaza Strip was also reduced from six nautical miles to three.

The goods crossing, known as Kerem Shalom, will remain open for food and medicine on a case-by-case basis.

It had already been closed to most deliveries since July 9, partly in response to the firebombs.

The move followed months of tension that has raised the possibility of a fourth war between Israel and Gaza militants since 2008.

Beyond the kites and last weekend's exchange of fire, mass protests and clashes along the Gaza border since March 30 have seen dozens of Palestinians shot dead by Israeli soldiers.

Hamas, the Islamist movement that runs the Gaza Strip, was further backed into a corner by the Israeli closure, with humanitarian conditions in the enclave of two million people already badly deteriorating.

- 'Playing with fire' -Gaza's only other border crossing, with Egypt, was also closed on Tuesday, an AFP journalist reported, but there was no official statement explaining why.

That prompted speculation that Egypt, which has mediated between Israel and Hamas, had closed it to add to pressure on the Islamists to clamp down on the arson kites.

The crossing, known as Rafah, has been largely closed in recent years, though Egypt had kept it mostly open since mid-May.

Israel has in recent days pledged a firmer response to the hundreds of arson kites and balloons that Palestinians have flown over the border fence since April.

Prime Minister Benjamin Netanyahu, under political pressure over the issue, has ordered the military to stop the firebombs -- raising the question of how that can be achieved.

The issue reportedly led to a debate between Israel's military chief of staff Gadi Eisenkot and far-right Education Minister Naftali Bennett during a security cabinet meeting on Sunday.

Israeli media reports cited Bennett, a Netanyahu rival with ambitions to be prime minister, urging the military to open fire on anyone launching the kites.

Eisenkot was quoted as telling him there was a risk of firing at children, and that even in the case of adults, such an approach ran against his "operational and moral position".

Hamas has slammed Israel's closure of the goods crossing as a "crime against humanity" and accused Israel of exaggerating the threat from arson kites.

Palestinians in Gaza see the devices as legitimate resistance against Israel's more than decade-long blockade.

"The Israeli occupation would be playing with fire if its warplanes targeted kite flyers," Hamas spokesman Sami Abu Zuhri said in a statement.

- Can Hamas stop them? -Israel's fire service says around 750 fires have burned some 2,600 hectares (6,400 acres), estimating the damage at millions of shekels (hundreds of thousands of dollars or euros).

The firebombs have mostly been transported by kites and balloons, but Israel's nature authority said a falcon was found on Monday with flammable material tied to its legs.

Israel's military signalled how it may try to stop the firebombs Monday when an aircraft struck two Hamas posts it said were near people launching them.

From Israel's perspective, Hamas can halt the kite launches if it chooses.

"Nothing happens in Gaza without the consent of Hamas," said Gabi Siboni of Israel's Institute for National Security Studies think tank.

Asked if the arson kites could lead to a military escalation, he said: "of course".

Jamal al-Fadi, a political science professor in Gaza, agreed that Hamas could stop the firebombs, but said it wants to use them to pressure Israel to ease its blockade.

The Islamist movement is however limited in how it can respond militarily, he said.

"It does not have an interest in a (military) confrontation because the people don't want a war," Fadi said.

On Saturday, Israel carried out air strikes partially in response to the fires, but also over the border protests and clashes.

It accuses Hamas of seeking to use the protests as cover for attacks. Palestinians and rights groups say protesters are being shot by Israeli snipers while posing no real threat.

The same day, around 200 rockets and mortars were fired at Israel from Gaza and four Israelis were wounded when a rocket hit a house in the nearby Israeli city of Sderot.

Warplanes against Kites and ballons, Israel is a joke. That is why the IDF are so weak in actual man to man combat, they are not used to get any sort of real resistance from a real armed group.