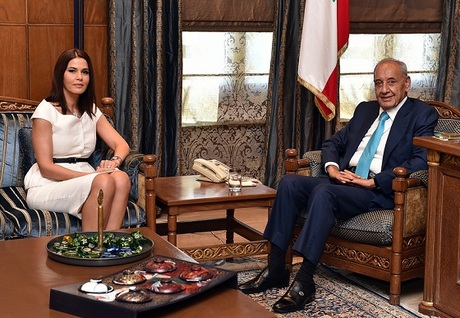 MP Sethrida Geagea of the Lebanese Forces announced Wednesday that the LF is “relying on President Michel Aoun's wisdom” as to the continuation of the landmark Maarab Agreement and the party's share in the new government.

Stressing that the LF is keen on the Agreement, Geagea said: “We are relying on the wisdom of President Michel Aoun in addressing what is happening, seeing as this tenure is his presidential tenure and we are keen on it.”

“May God prolong the life of the president and we are counting on his wisdom amid this critical situation that we are going through in Lebanon. He told LF leader Dr. Samir Geagea when he met him at the presidential palace that the Free Patriotic Movement is 'one eye' and the LF is the 'other eye,'' the MP added.

Asked whether the LF was insisting on getting a so-called sovereign ministerial portfolio in the new Cabinet, Geagea said: “I will not talk about this issue and I will leave it to the president and PM-designate Saad Hariri.”

“But I will tell the 'big brother' to take his 'other brother' into consideration,” she added.

Geagea was speaking after a 30-minute meeting with Speaker Nabih Berri in Ain el-Tineh.

She said she visited the Speaker to invite him to the Cedars International Festival.

Aoun told LF leader Dr. Samir Geagea when he met him at the presidential palace that the Free Patriotic Movement is 'one eye' and the LF is the 'other eye,''!

Both eyes are blind!!!

Its good to see her out and about, shes a lot easier on the Eye than one of Kizballahs models.

It's a funny coincidence that she has the same name as the LF leader.