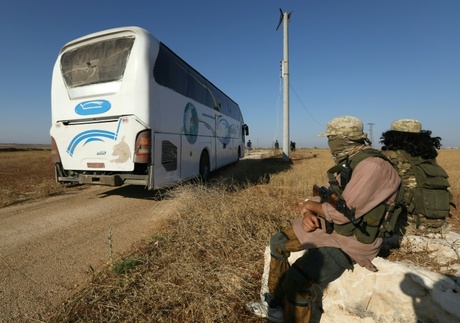 Several thousand residents evacuated two pro-regime towns in northern Syria on Thursday, putting an end to one of the longest sieges of the country's seven-year civil war.

Fuaa and Kafraya in Idlib province were the last remaining areas under blockade in Syria and a rare example of pro-government towns surrounded by rebel forces.

Surrounded and bombed by hostile factions, the towns had become a rallying cry for the government and its ally Iran.

A deal was reached Tuesday between regime-backer Russia and rebel-ally Turkey to see the residents taken to government-held territory in exchange for the release of prisoners from regime jails.

On Wednesday morning, barricades on the road leading into the towns were removed to let dozens of buses in, AFP's correspondent there said.

Just after midnight, the buses drove out of Fuaa and Kafraya and Thursday morning were at the village of Al-Eis, crossing from rebel-controlled territory into regime-held areas in Aleppo province.

Armed HTS fighters stood on the roadside as the convoy of evacuees inched past, with pro-government militiamen and regular civilians sitting solemnly on board and staring ahead.

- 'Entirely empty' -Some 6,900 civilians and fighters were evacuated and the two towns were now "entirely empty of residents", the Syrian Observatory for Human Rights, a Britain-based monitoring group, said Thursday morning.

According to HTS sources, the evacuation had been agreed in exchange for the release of 1,500 people from government-run jails.

An HTS source said the group's fighters had entered the towns after the evacuation was complete.

Fuaa and Kafraya came under siege in 2015 as rebels and jihadists overran the surrounding province of Idlib, cutting off access to food and medicine.

Those forces had allowed the United Nations and the Syrian Arab Red Crescent to deliver aid to the towns in exchange for similar deliveries to two government-besieged towns near Damascus.

In April 2017, thousands were bussed out of Fuaa and Kafraya in exchange for parallel evacuations from the towns of Zabadani and Madaya.

But a blast targeting a convoy of evacuees from Fuaa and Kafraya left 150 people dead, most of them civilians and including 72 children.

Some reports have suggested Tuesday's deal also involves an agreement to spare Idlib a military offensive by the regime.

The province borders Turkey to the northwest but is otherwise almost completely surrounded by regime-held territory.

It is home to more than two million people, including Syrian civilians and rebels moved out of other opposition-held territory in surrender deals.

Syria's conflict erupted in March 2011 with protests against President Bashar al-Assad that escalated into a devastating, complex war.

After losing swathes of territory to rebels in the early years of the conflict, Assad's forces have managed to regain much of the country since Russian forces intervened in the regime's favour in 2015.

The retaking of second city Aleppo last year marked a major turning point and earlier this year the government retook Eastern Ghouta, the last rebel-held area near the capital Damascus.

In recent weeks Russia brokered a deal for rebels to hand over large parts of the southern province of Daraa, considered by many as the birthplace of the anti-Assad revolution.

Fighting has continued in the south though, with at least 15 civilians reported killed in air strikes in Daraa province on Wednesday.