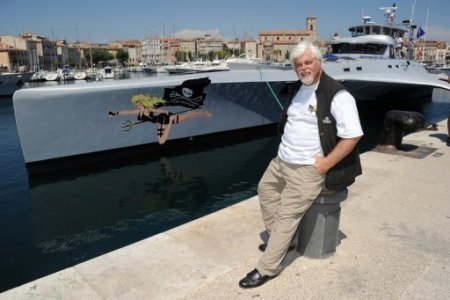 Anti-whaling activists chasing the Japanese harpoon fleet suffered a major setback Thursday when the hull of one of their ships cracked in massive seas, forcing a second to divert to its rescue.

The Sea Shepherd Conservation Society said the Brigitte Bardot's hull split when it was struck by a "rogue wave" as it tailed the Japanese factory ship Nisshin Maru in six meter (20-foot) swells some 1,500 miles (2,400 kilometers) southwest of Australia.

"The crack has been getting wider as the seas continue to pound the vessel," the activist group said.

Sea Shepherd spokesman Paul Watson said lead vessel the Steve Irwin was en route to the troubled Brigitte Bardot, which has also suffered severe damage to one of its pontoons, but warned it would take 20 hours to get there.

The Bardot's captain, South African-born Jonathan Miles Renecle, was "confident that the ship will stay afloat until the Steve Irwin arrives" he added.

"This is disappointing but these are hostile seas and we have always been prepared for situations like this," Watson said.

"Right now the safety of my crew on the Brigitte Bardot is our priority and we intend to reach the crew and then do what we can to save our ship."

The incident means just one Sea Shepherd vessel, the Bob Barker, is now tailing the Japanese fleet, which it intercepted on Sunday with the help of a military-style drone.

Watson said all the crew were safe and uninjured and the Bardot, Sea Shepherd's scout vessel, was "repairable".

"We'll be bringing it back to Fremantle and then the Steve Irwin will return to support the Bob Barker," he told Sky News via satellite phone from the Southern Ocean, estimating that it would be a five-day trip.

"It's a setback, but you know, when you come down here you're facing a number of dangers, not just the Japanese whaling fleet but also the very remote area, it's a hostile area weather-wise with ice," he added.

Watson said it was Sea Shepherd's eighth season pursuing the whalers and it was "inevitable something (like this) is going to happen sometime, we'll just deal with it and carry on.

"I'm still confident that we'll be able to intervene against the Japanese whaling operations," he said.

"We were in communication with them but they've got it under control themselves now."

Japan's Fisheries Agency, which commissions the annual whale hunt, routinely refuses to comment on the issue and declined to be drawn on the damaged boat Thursday.

"I cannot make any comment related to the (whaling) mission," an agency official said.

Sea Shepherd purchased the Australian-flagged Brigitte Bardot, a high-speed 100-foot monohull racer, to replace the futuristic speedboat Ady Gil, which sank during a fierce clash with the harpooners in January 2010.

Watson said there were 10 crew on board the stricken Bardot -- three Britons, three Americans, an Australian, a Canadian, a Belgian and its South African captain Renecle.

Commercial whaling is banned under an international treaty but Japan has since 1987 used a loophole to carry out "lethal research" in the name of science -- a practice condemned by environmentalists and anti-whaling nations.

Confrontations between the whalers and increasingly sophisticated activists have escalated in recent years and the Japanese cut their hunt short last season due to Sea Shepherd harassment.

Japan's coastguard has deployed an unspecified number of vessels to protect the whaling ships, using some tsunami reconstruction funds, and the whalers are also suing the activists in Washington seeking an injunction against what they say is a "life-threatening" campaign.