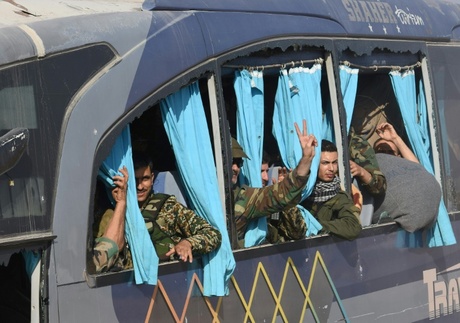 Hardline rebels and civilians began leaving a southwestern sliver of Syria near the Israeli-annexed Golan on Friday under a surrender deal, state media, as the evacuations turned deadly with a car accident.

The transfers come under a deal agreed this week between Russia and Syrian rebels in Quneitra province that will restore state control over the sensitive zone.

Rebels will hand over territory they control in Quneitra and the neighboring buffer zone with the Golan Heights.

The deal also provides for the evacuation to northern Syria of any rebels and jihadist fighters who refuse to live under government control.

On Friday afternoon, buses began taking civilians and armed fighters out of opposition-held territory through the town of Jaba, state television said.

It said they would be taken north to Idlib which is under jihadist and rebel control. The channel earlier reported more than 50 buses were prepared to ferry people north.

Vehicles had been arriving in Syria's south since Thursday, said the Syrian Observatory for Human Rights.

"As the convoy of buses was gathering, one of the drivers lost control and four people, including two women, were run over and killed," said the Britain-based monitor.

Fighters then fired their weapons, wounding a bus driver.

Observatory head Rami Abdel Rahman said it was still unclear exactly how many people would ultimately be evacuated.

Among them were members of Hayat Tahrir al-Sham (HTS), an alliance led by al-Qaida's onetime Syria affiliate which refused to sign up to the deal.

Quneitra is a thin, crescent-shaped province wedged between the buffer to the west and Daraa province to its east.

One month ago, Syria's regime launched an operation to retake rebel areas in Daraa and Quneitra, using military force and surrender deals brokered by its Russian ally.

Fighting forced several hundred thousand people to flee, and as many as 140,000 remain displaced in Quneitra, according to the United Nations.

The U.N.'s humanitarian coordination office (OCHA) warned they are inaccessible to aid organizations based around an hour away in Damascus because of a lack of approvals.

Both Israel and Jordan, which shares a border with Syria, have kept their borders closed to the displaced.

Israel seized 1,200 square kilometers (460 square miles) of the Golan during the Six-Day War of 1967, then annexed it in 1981 in a move never recognized internationally.

Some 510 square kilometers of the Golan remain on Syria's side of the ceasefire line, with a U.N. peacekeeping force overseeing a buffer zone stretching some 70 kilometers from Lebanon in the north to Jordan in the south.

Under the terms of the deal, a rebel source told AFP, Syrian and Russian forces are to enter the buffer zone.

Another crime committed by SOSaesh boyfriends
The Daily Star
BEIRUT: The Internal Security Forces has arrested five suspects involved in a violent carjacking that took place in Tamnin al-Tahta in Baalbeck several months ago, an ISF statement reported Friday.

The suspects confessed to stealing a Renault and beating the man who was driving it, and later selling the car to another person who is wanted by the ISF, the security agency said.