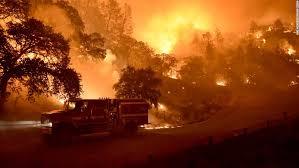 The so-called Carr fire outside Redding swept across a river late Thursday and is only six percent contained.

It killed a private bulldozer operator who was fighting the blaze, said Bret Gouvea, a commander with the California Department of Forestry and Fire Protection.

He said the blaze engulfed the western part of the town of 90,000 people.

"The fire is moving so fast that law enforcement is doing evacuations as fast as we can. There have been some injuries to civilians and firefighters," said department spokesman Scott McLean.

More than a dozen structures have burned, authorities said.