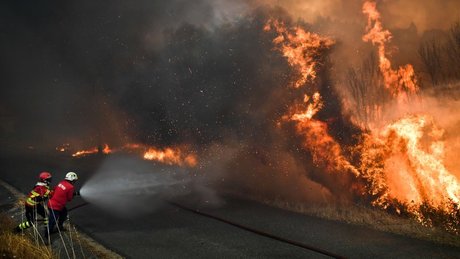 Firefighters aided by calmer winds were gaining control  on Thursday of a wildfire near Spain's famous Estrecho natural park in the southwest of the country, an official said.

"If winds continue to let up, I believe it will be brought under control this morning," a spokesman for the firefighting service in Andalusia told AFP.

Dozens of firefighters were tackling the blaze which broke out on Wednesday at Punta Camarinal near Tarifa in the province of Cadiz amid scorching temperatures.

The flames threatened, but did not enter, the nearby 19,000-hectare Estrecho natural park, the spokesman added.

The park is  home to oak, cork and wild olive trees as well as birdlife, such as white storks, vultures and falcons.

It also takes in Bolonia beach, which is regularly included on lists of Spain's best beaches because of its fine white sand and crystal clear waters.

Like much of Spain, Cadiz is on high alert for forest fires because of a heatwave pushing temperatures past 40 degrees Celsius (104 Fahrenheit).

Spain's meteorological office, Aemet, said the hot spell would stretch to at least Sunday as a mass of hot air moves up from Africa.

In 2008, a wildfire destroyed around 500 hectares (1,200 acres) of land in the Estrecho natural park and forced the evacuation of around 1,000 people.