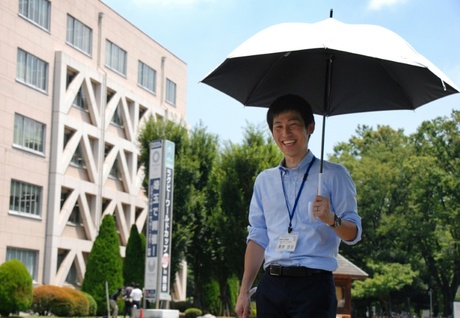 Officials in Japan have urged men to buck local gender stereotypes and carry parasols to protect themselves from the sun in the midst of a deadly national heatwave.

At least 119 people across the country died from heat stress last month, while over 49,000 others were hospitalised.

As record high temperatures dragged on, provincial officials north of Tokyo launched a campaign Wednesday encouraging men to beat back the heat by sporting parasols -- a fashion accessory commonly associated in Japan with skin-conscious women protecting against a summer tan.

"I used to think a parasol was strictly for women. I didn't think of using it because no men did," Saitama prefecture official Ryoji Kurihara told AFP.

"I realised using a parasol is like carrying the shade with me. I feel much cooler under it," he added.

Tomomi Anzai, a Saitama government official in charge of the parasol campaign, said the initiative was designed to help reduce the risk of heat stroke in a city already known for its scorching summer temperatures.

But for some men, the humiliation of carrying a traditionally female accoutrement was a bigger concern than the stifling heat.

"I wouldn't use it. It's feminine... I wear a hat or use sunblock," 23-year-old student Shige Kato told AFP.

On the same day it reached more than 40 C for the first time in Tokyo.

Japan's weather agency has warned that much of the country will continue baking in temperatures of 35 degrees or higher through early August.