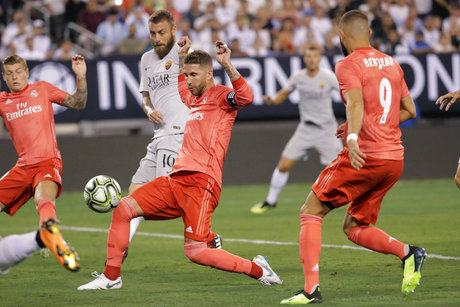 Gareth Bale is serving notice that he is ready to shine without Cristiano Ronaldo, factoring in both goals as Real Madrid wrapped up their U.S. tour with a 2-1 win over Roma on Tuesday.

Bale and Marco Asensio scored for Real Madrid who put on a strong performance especially in the first half of the International Champions Cup friendly at MetLife Stadium in New Jersey.

Real Madrid is hoping Bale is ready to fully evolve into the player they signed for a world record fee in 2013.

Asensio, with his third goal of the preseason, opened the scoring just two minutes into the contest. Bale delivered a brilliant pass to the foot of Asensio and he found the back of the net.

Real Madrid struck again in the 15th minute as Bale would score this time, taking an equally superb pass from Dani Carvajal. Bale walked in and beat goalkeeper Robin Olsen to make it 2-0.

Real Madrid wasn't nearly as dominant in the second half as most of their starting squad was subbed off.

Kevin Strootman made it interesting by scoring in the 83rd minute for Roma.

Strootman was left wide open off a throw-in and headed pass and all he had to do was hammer it past the startled Real Madrid goalkeeper.