In Venezuela's Hospitals, Eat at Your Own Risk 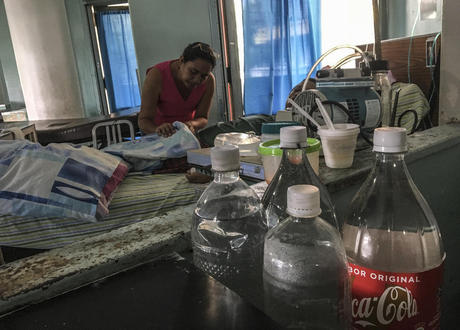 Hardly anybody likes hospital food but in Venezuela, it's so awful -- monotonous, starchy diets cooked in filthy conditions, and newborns fed intravenous solution for lack of baby formula -- that experts call it an actual health risk.

Take Carla Lopez, 40, who has been hospitalized for three months to treat open wounds on her foot as a result of diabetes.

Lopez should go easy on pasta and rice -- but that's all she gets.

"I eat whatever they give me," Lopez said as she waves away flies buzzing over a plate of rice and lentils at University Hospital in Caracas. It is pretty flavorless stuff as the hospital is out of salt.

An excess of starch causes her blood sugar levels to shoot up.

Even if she were out of the hospital, she could not afford, say, a kilo (2.2 pounds) of chicken, which costs 1.5 times her monthly salary in this oil-rich but economically ravaged country saddled with runaway inflation.

Lopez says that for breakfast, she gets a kind of cornmeal patty known here as an arepa, and for lunch, it's either pasta or lentils with rice.

"In the evening, they serve you another arepa -- a small, skimpy one," said Lopez.

Back in better times, this hospital used to have different cooks for different medical problems, said nutritionist Gladys Abreu.

Now, everybody gets the same fare, and not much of it: 40 grams of rice and 25 grams of legumes.

"That is hardly enough for a small child," said one staffer in the hospital kitchen.

Another hospital employee who asked not to be named complained that garbage piles up at the facility, an imposing 11-story building that is 60 years old.

Indeed, a nearby trash bin overflows with detritus.

The National Hospital Survey, published in March by the opposition-controlled National Assembly and by an NGO called Doctors for Health, said 96 percent of Venezuela's hospitals fail to feed their patients adequately, or do not feed them at all.

The poll covered 104 state-run hospitals and 33 private ones.

At the Concepcion Palacios maternity clinic, also in Caracas, doctors stopped providing formula for newborns because there was no money for it.

Parents can provide their own, but one mother, Yereercis Olivar, who just gave birth to her second child, cannot afford formula.

She could not nurse the baby, either, because they were separated to protect the child from the chicken pox that Olivar came down with while pregnant. It has left her skin covered in blisters.

Olivar was desperate, so she started trying to extract milk from her breasts with a syringe.

It took three days for that excruciating method to kick in and provide milk.

During that time, the baby lived "only on serum" -- the kind used in intravenous solutions to keep adults hydrated. It was fed to the child from a baby bottle.

Baby formula, like so many basic goods in Venezuela, is available only on the black market and a can of it costs around 50 million bolivars, or $15. That is nine times the average monthly salary.

The hospital survey said 66 percent of Venezuela's maternity wards have no formula to give to babies.

The decline into hellish health care conditions has been swift in recent years, said Olivar, whose first child was born at the same hospital in 2016. It was better back then: she could not nurse her child, but there was baby formula.

Now, "there are cockroaches in the area where they prepare the baby bottles," said Silvia Bolivar, a nurse with 25 years on the job.

From holes in the walls and ceiling, water leaks and rodents scamper, she added.

The health ministry ignored a request from AFP for comment on this story.

On the sixth floor where she is being treated, Olivar says she has heard nurses protesting for the past six weeks to demand better pay and working conditions.

President Nicolas Maduro said the crisis in Venezuela's hospitals has been aggravated by U.S. sanctions against his government.

He says this punishment prevents the country from buying medical equipment and medicines, 80 percent of which are in short supply, according to labor unions.

"It is hard when patients come to us, trembling and on the verge of fainting, to say they are hungry," said nurse Bolivar.

At the maternity clinic, the baby bottles smell bad. There is no soap to wash them and the sterilization machine is broken.

Dark mold covers containers of rice and pasta that is fed to mothers.

Both there and at the University Hospital, the floors and bathrooms are dirty. There is no disinfectant. Cleaning is done with water and rags.

Lopez, the lady with complications from diabetes, does not know how much longer she must remain in her decrepit hospital room, which is furnished with broken chairs. Her foot is not getting any better.

But it's not all gloom: her hospital roommate gave her a bouquet of sunflowers to brighten things up.