Pink Out of Hospital, Cancels Another Sydney Show 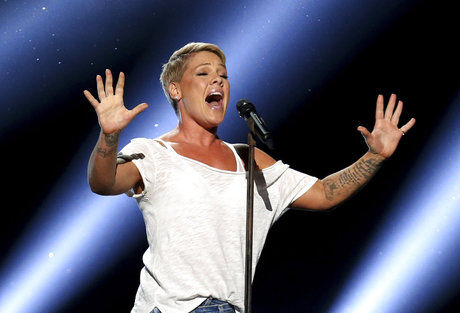 American pop star Pink has been discharged from an Australian hospital after being treated for an "excruciating" gastric virus, but has canceled another Sydney concert scheduled for Thursday while she recovers.

The singer pulled out of a show in Sydney last Friday before battling through a Saturday performance.

But she was rushed to hospital the next day, suffering from dehydration and a virus, with two further concerts called off.

Pink told her 4.7 million Instagram followers: "About 20 minutes before I left for the soundcheck, I was rushed to the hospital, in excruciating pain.

"I was discharged from hospital last night, and am following doctors orders of liquids and rest," she added.

On Wednesday, after being discharged, she announced the cancellation of Thursday's performance but vowed to be back on stage at the weekend.

The singer of "Just Give Me a Reason" and "Get the Party Started" said her shows were physically demanding and she needed to be in peak condition.

"I think all of you deserve the full show and me at my best," she told her huge Australian fan base.

"Our next show will be Saturday, and until then I will be drinking green tea, and spending time with my kids."

The pop sensation took to social media last week to defend canceling Friday's show, after photographers snapped pictures of her relaxing on an Australian beach with her family.

In an Instagram post, Pink said her children had also both been ill, and that "parasite paparazzi" had failed to capture her multiple visits to the doctor.

"You can think whatever you want, it's your right, but I have never taken advantage of any one in my entire life," she said, defending the Friday postponement while she was at the beach.