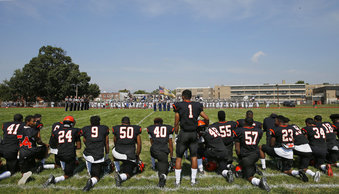 President Donald Trump called Friday for NFL players who kneeled during the national anthem to be suspended without pay, renewing his attack on the protesting athletes.

Trump, who triggered an uproar last year after condemning players protesting social injustice, lashed out again after two Miami Dolphins players took a knee during a pre-season game on Thursday.

"The NFL players are at it again - taking a knee when they should be standing proudly for the National Anthem," Trump wrote on Twitter.

"A football game, that fans are paying soooo much money to watch and enjoy, is no place to protest. Most of that money goes to the players anyway.

"Find another way to protest. Stand proudly for your National Anthem or be Suspended Without Pay!"

Trump's salvo came after Miami players Kenny Stills and Albert Wilson took a knee during a rendition of "The Star-Spangled Banner" on Thursday.

In a separate protest, Philadelphia Eagles players Malcolm Jenkins and De'Vante Bausby raised their fists during the playing of the song before their game against the Pittsburgh Steelers.

Former San Francisco 49ers quarterback Colin Kaepernick launched the protest movement in 2016, declining to stand for the national anthem to draw attention to racial and social injustice following the deaths of several unarmed black men during confrontations with law enforcement.

The protests had largely fizzled out until Trump last year described Kaepernick and other players who took a knee during the anthem as "sons of bitches" who should be fired.

Political analysts have predicted Trump would seek to keep the issue alive to energise supporters ahead of November's crucial mid-term elections, framing protesters as unpatriotic and disrespectful to the military.