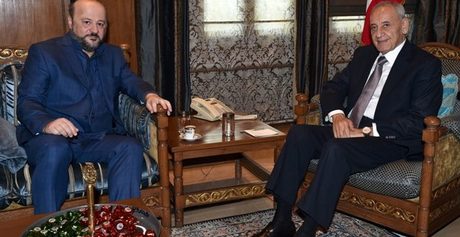 The two men reportedly discussed the general situation in the country and the headway of the government formation process.

Lebanon is still struggling with forming a new government since the designation of Prime Minister Saad Hariri in May.

Hariri’s mission has been delayed since amid wrangling between political parties over Cabinet shares and quotas.

Incredible news, what they should have discussed was Riachi's blue suit! He must have had no where to go after he left the Disco last night and decided to call in on his old buddy for a little "pickme upper"....