Multiple Attacks Claimed by IS on Police in Chechnya 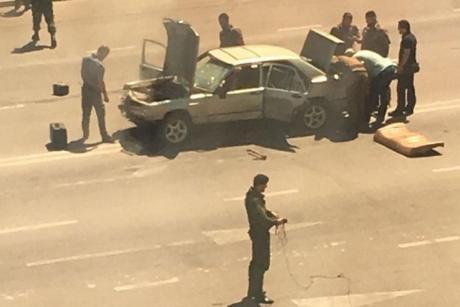 Armed assailants injured several policemen in attacks in three locations in the Russian republic of Chechnya on Monday, as the Islamic State group claimed responsibility.

Russia's Investigative Committee said it had launched probes into three separate attacks against police, including a failed suicide bombing.

In the first attack on Monday morning, two men entered the district police department in the town of Shali and wounded a pair of policemen with knives, investigators said in a statement.

In the village of Mesker-Yurt north of Shali, a man with a backpack attempted a suicide bombing near a police post but "police officers and civilians were not harmed by the blast," the Investigative Committee said.

The third incident occurred on the outskirts of the Chechen capital Grozny, where a man attempted to run over a traffic policeman in his car and subsequently hit two more officers as he was chased.

"The criminals were neutralized," the Investigative Committee said.

"Fighters from the Islamic State attacked Chechen police officers and elements in Grozny and Shali in Mesker-Yurt," Amaq said, according to SITE.

Chechnya's strongman leader Ramzan Kadyrov, who was visiting Saudi Arabia on Monday, said extremist propaganda that "confuses the young men" was to blame for the assaults.

He said the attacks were staged on Monday to "darken" the festivities ahead of Tuesday, when Muslims begin to celebrate the Islamic Eid al-Adha holiday.

He said the man who attempted to stage the suicide bombing was injured and was in hospital.

"The situation in Grozny and Chechnya is absolutely calm," he said.

Chechnya's interior minister Ruslan Alkhanov said the assailants "attempted to destabilize the situation in Chechnya" but have been stopped. He said no officers were killed.

Moscow battled separatists in two brutal wars in the 1990s in Chechnya and has since installed Kadyrov, a former separatist turned Kremlin loyalist, to rule the republic with an iron fist.

After the defeat of Chechen insurgents, Russian authorities have been locked in a simmering conflict with Islamist militants from across the North Caucasus that has killed scores of civilians and police.

Chechnya is not good enough, they should strike Moscow’s Kremlin. But then again, why would they? The IS was bombed day and night by the US led coalition in Syria and Iraq, not Russia nor the Syrian regime.

Thank you southern for being patriotic and for posting under the patriotic alias. It is one of my favorite aliases that you use.

Having said that I was shocked to learn from you the wahhabi-zionist led terrorists attack their enemies in Chechnya. But then I was reassured from you that Chechnya will be cleaned once more thanks to the Lebanese-Iranian resistance.

I am sorry I missed your comments over the weekend but I was busy with the dance class that I am taking.