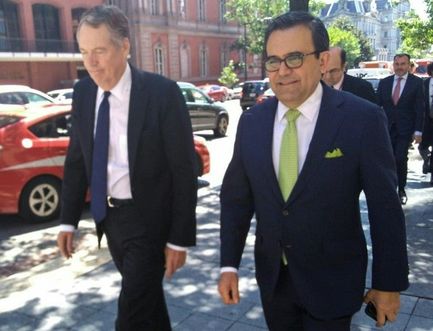 Talks between US and Mexican negotiators on updating the North American Free Trade Agreement (NAFTA) are set to resume Monday after a weekend of marathon bargaining in Washington, and hints that a deal is near.

The negotiations are aimed at ironing out bilateral issues and then finalizing the new agreement with Canada, the third NAFTA partner.

Guajardo and Mexico's Foreign Minister Luis Videgaray have been shuttling back and forth to Washington for more than a month for meetings with Lighthizer to try to iron out the bilateral stumbling blocks, including rules for the auto market, before the end of August.

Talks ground to a halt in May, in part due to the July 1 presidential elections in Mexico.

The trilateral treaty has been a key target in Trump's aggressive trade strategy, and he has repeatedly threatened to scrap it altogether, branding it a "disaster."

But after a year of intense negotiations to salvage the 25-year-old pact, the United States and Mexico appear close to a point where Canada -- which had been waiting for US-Mexican agreement on auto industry rules -- can rejoin the talks.

US and Mexican negotiators are keen to seal a new deal before Mexican President Enrique Pena Nieto hands over power to president-elect Andres Manuel Lopez Obrador on December 1. For that to happen, the US Congress must be notified 90 days in advance.

Foreign Minister Chrystia Freeland of Canada said earlier that she was encouraged by the progress and would rejoin the talks once bilateral discussions concluded.

Trump hinted that a deal was near in a Saturday morning tweet.

"Our relationship with Mexico is getting closer by the hour," Trump wrote. "A big Trade Agreement with Mexico could be happening soon!"