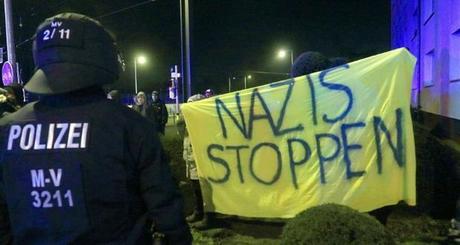 Far-right mob violence targeting immigrants in the German city of Chemnitz has again cast an ugly spotlight on the country' ex-communist east as a hotbed of xenophobia.

Extremist hooligans have vented their anger at foreigners, hunting some in the streets, since a German man was stabbed to death in the early hours of Sunday, allegedly by an Iraqi and a Syrian who were arrested Monday.

Especially the state of Saxony, where Chemnitz is located, has been a center for resentful opposition against Chancellor Angela Merkel and her 2015 decision to keep open German borders to a mass influx of migrants and refugees.

Saxony state capital Dresden has long been an iconic city for German neo-Nazis embittered by the Allies' aerial bombing of the Baroque city center in World War II.

The city in recent years became the birthplace of the so-called PEGIDA movement, short for "Patriotic Europeans Against the Islamization of the Occident".

"We are the people," the demonstrators chant regularly, co-opting the slogan of rallies before the fall of the Berlin Wall, and suggesting a righteous revolt against an out-of-touch political elite and the "lying press".

Earlier this month, Dresden again made headlines when an anti-Merkel PEGIDA follower argued with a TV team, which was then obstructed by police -- a scandal that worsened when it turned out the protester was an off-duty police employee.

The anti-immigration and anti-Islam Alternative for Germany (AfD) party also made some of its strongest gains in Saxony and the four other states that until 1990 were part of Soviet-allied East Germany.

Small towns such as Heidenau and Freital have earned nationwide notoriety as neo-Nazis and angry residents have hurled abuse at people fleeing war and misery -- and rocks at police sent to protect those seeking a safe haven.

State leaders have cautioned against "stigmatizing" the east, which despite a multi-billion-euro infrastructure overhaul still lags the former West in wealth, jobs and opportunities.

Yet a spate of arson attacks against refugee shelters, and swastikas scrawled on their walls, have brought back dark memories of xenophobic violence that flared at the time of Germany's reunification over a quarter-century ago.

In the turbulent early 1990s -- when East Germans got their first taste of democracy, but also faced economic collapse and uncertainty -- the frustration exploded in sometimes deadly mob attacks against asylum shelters.

Historians point at other roots of entrenched far-right sentiment in the east, the only part of Germany where the neo-Nazi National Party of Germany (NPD) has seats in many town halls.

While West Germany was credited with dealing relatively openly with the Nazi era and Holocaust, the East German regime resisted "de-Nazification" in the Cold War and painted the Third Reich as an outgrowth of Western capitalism.

It termed the Berlin Wall it erected in 1961 to stop a massive popular exodus an "anti-fascist" rampart.

The foreign-born population was minimal in East Germany, with the largest group some 60,000 laborers from "socialist brother state" Vietnam, who would bear the brunt of racist attacks after the Wall fell.

It was the disenchanted right-wing extremist skinhead youth culture that, in the eastern state of Thuringia, spawned three neo-Nazis whose bloody crimes, when they finally emerged in 2011, would shock Germany.