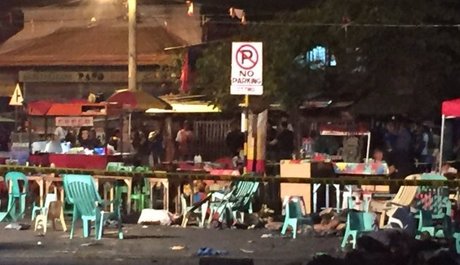 A bomb blast tore through a crowd at a festival in the southern Philippines on Tuesday, killing one person and wounding dozens more in the second deadly attack in under a month in the region, authorities said.

The powerful bomb in the town of Isulan went off near a night market that was part of local celebrations, sending people running in terror.

"It was loud, we immediately left the area but I can't forget the images of a young girl carried by her father, her shirt covered in blood," said witness Judy Sapto, an area resident.

The attack, claimed by the Islamic State group, is the latest violence in the south of the majority Catholic archipelago, where Islamist militants have been fighting a decades-long insurgency.

"It's obvious that the Bangsamoro Islamic Freedom Fighters (BIFF) with links to ISIS (Islamic State) has the strongest desire to initiate these kind of attacks", said Army Captain Arvin Encinas.

The local mayor's office said two other bombs were discovered in the area and defused by authorities.

One person was killed and at least 36 were hurt in the blast, the mayor's office added. There was no immediate word on the victims' conditions.

Local police officials said the bomb went off near a petrol station as Isulan was celebrating the 61st anniversary of its founding.

The attack comes less than a month after a van bomb ripped through a military checkpoint on the neighboring island of Basilan, killing 10 people.

Islamic State claimed responsibility for that bombing and authorities believe the man behind the wheel of the explosives-laden van may have intended to target a nearby children's parade.

President Rodrigo Duterte put the southern Philippines under martial rule until the end of this year after pro-IS militants seized the southern city of Marawi last year.

Several armed groups are active against government forces in the south of the Southeast Asian country, where a decades-long rebellion has claimed more than 100,000 lives by government count.

These latest blasts follow the Duterte government enacting a law to create greater autonomy for the Muslim minority in the south and which is hoped to help end the conflict.