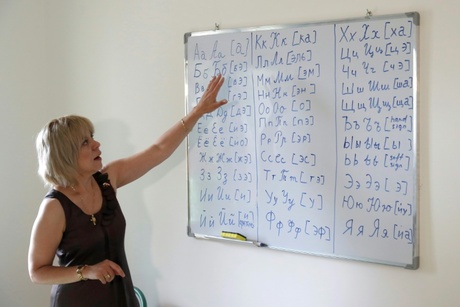 In a dimly-lit classroom in a Lebanese mountain town, students of all ages pore over Cyrillic workbooks and repeat carefully after their blonde instructor.

Moscow may have won influence in war-torn Syria through its blistering military intervention, but it is adopting a softer approach in neighboring Lebanon, where France and the U.S. have held stronger sway.

Whether through cultural outreach, planned business deals or traditional diplomacy, Russia appears to be trying to put down deep roots in the tiny Mediterranean country.

In her classroom at the Russian-Lebanese Cultural Center, nestled in the town of Aley, instructor Galina Pavlova says she hopes her native tongue will find more fans among Lebanese, who in addition to Arabic often speak French and English.

"We don't want France and the United States to be the only ones present in Lebanon -- Russia is a very important country too," she tells AFP.

The Aley center is one of three new such hubs to have opened in Lebanon this summer alone, established with the backing of Moscow's embassy in Beirut.

"This expansion falls within the framework of a strategy aiming to strengthen Moscow's presence in the Middle East," says Imad Rizk, who heads the Isticharia Center for Strategic and Communication Studies.

Ties between Moscow and Beirut intensified in the 1950s with the rise of Lebanon's left, before fading after the collapse of the Soviet Union.

"Lebanon, still strongly associated to the West, is one certainly symbolic piece of (Russia's) broader desire to remodel the world governance," says Julien Nocetti, a specialist in Russia's role in the Middle East.

The aim, he says, is to hasten "the coming of a post-West world order."

As new cultural centers open, Moscow is also boosting to 60 the number of university scholarships it gives to Lebanese students this year and deepening its economic ties to Beirut.

It nearly doubled the value of its exports to the tiny country from $423 million in 2012 to $770 million last year, according to Lebanese customs data.

The two countries are in talks over potentially opening a "green corridor" for Lebanese agricultural exports to Russia.

And Novatek, one of Russia's largest natural gas producers, is part of a consortium expected to begin exploring for gas off Lebanon's coast next year.

Lebanon is relying on external help to revive its struggling economy, and in April a donor conference raised $11 billion in low-interest loans and aid for the state to improve basic public services.

"We hope to make the Russians participate in the vast project to modernize Lebanese infrastructure," says Jacques Sarraf, who heads the Lebanese-Russian Business Council.

In addition, Sarraf says, "Russian businesses intend to put down roots in Lebanon's north ahead of Syria's reconstruction."

But the process is complicated, with both Syrian and Russian firms facing European and American sanctions that have left Lebanese banks "reluctant to deal with their Russian counterparts," he adds.

Lebanon's banking sector is already being carefully monitored by the U.S. Treasury, which is seeking to weaken Iran-backed Hizbullah by targeting "suspicious" banking.

Lebanon's growth has slowed to a crawl in recent years as political divisions have paralyzed the government and services have been strained by the arrival of 1.5 million Syrian refugees.

Moscow is looking to lend a helping hand there too, launching an initiative in July to repatriate refugees from around the region.

The proposal has been welcomed by the political class in Lebanon, which hosts some 900,000 refugees who could return to Syria, according to President Michel Aoun, who is close to both Damascus and Hizbullah.

Moscow has also proposed a billion-dollar defense contract to arm Lebanese troops, but Lebanon pulled out at the "last minute," says Sarraf.

Such a deal could have jeopardized the sizable U.S. support Beirut receives from the U.S., including the $1.7 billion it has received in military aid since 2006.

Aram Nerguizian, co-director of the Carnegie Middle East Center's department on civil-military relations, says Lebanon's ties to the U.S. were at stake.

"If Lebanon accepts or even insinuates an intent to accept a Russian credit line for the purchase of Russian defense articles, it will have significant -- and potentially irreversible -- geopolitical consequences on Lebanon's existing bilateral and multilateral commitments and partnerships, especially ties to the U.S.," he tells AFP.

you can learn russian in tabarja... it's usually more pleasant but also more expensive. However, it may be with a Ukrainian or Belarus accent.... but who cares, right?

Lebanese need saving... just like Zacchias. Take time out of your day and listen to something that is very valuable - Zacchias' story:

Its good to hear that the Russians are providing Russian language courses in Lebanon nothing wrong with that however what are the benefits of that for the typical Lebanese?
Where and when will is this very unique language be useful? trading on the stock exchange? negotiating trade deals with Europe or South East Asia? or maybe if one was to further his education through going to an Ivy league school in the USA? or simply maybe so that the typical Lebanese tradesman can apply his skills working in Russia if the opportunity presents itself? The odds are extremely low for any of the above but more than likely to allow Russia to sell Lebanon more of its technologically backward items. As the report above states Russia nearly doubled the value of its exports to the tiny country from $423 million in 2012 to $770 million last year, according to Lebanese customs data. Thanks you Clown and the Circus plus all the middle men who continue to sell Lebanon.

By Zionists you included those who protect and support them in Lebanon? AKA Kizballah? Ali and Hussian will look great going down the Bismany district in Moscow on their mopeds with flip flops and a pic of Hajj Hassan on the bikes windshield.

Wow... I can't handle how clever that remark was.

Good we have a giga fortuneteller on the forum who can look in his mahdi inspired crystal ball and tell us the future.

and why do you live in the West (USA) ya heretic and not in Iran?

To fill up cars with 87 unleaded.

what are your predictions for the Dollar? The Russian Ruble or the Chinese Yuan?

Didn't you also predict 2016 will be the downfall of Saudi Arabia?

You need to burn more incense and black salt in your cauldron.