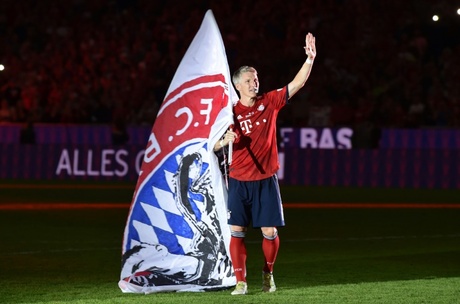 Bastian Schweinsteiger bid farewell to Bayern Munich in style on Tuesday as the former Germany captain scored on his final appearance in the famous red against his current club Chicago Fire.

Three years after hastily leaving for an 18-month spell at Manchester United, Schweinsteiger, 34, finally said goodbye to Bayern with a testimonial appearance.

For the record, Bayern won 4-0, with the final goal fittingly scored by Schweinsteiger, who played the first half for his MLS side and the second for the German champions.

Bayern were 2-0 up at the break with goals by Serge Gnabry and Sandro Wagner, who hit the post after just two minutes, before Schweinsteiger pulled on the red shirt.

Having moved up from midfield to play as a striker, he dutifully obliged on 83 minutes with a superb volley.

Schweinsteiger perfectly met David Alaba's cross to hit the back of he net with the outside of his boot and was lofted into the air by his Bayern team-mates.

He wore a huge grin at the final whistle, but was fighting back tears when shown a video montage of messages from Bayern and Germany stars to their "Fussballgott" (football god).

"I am one of you and I will always be," he told Bayern fans.

"My past belongs only to Bayern and nobody else. Without you, I wouldn't be here."

It was always going to be an emotional night for Schweinsteiger, who wept openly after his 121st and final appearance for Germany almost exactly two years ago.

This was the first time Schweinsteiger had returned to the Allianz Arena since leaving for United in July 2015.

"It's a huge honor for him - he's been looking forward to it all year," his wife, former tennis star Ana Ivanovic, told broadcaster RTL before kick-off.

Having joined as a 13-year-old in 1998, Schweinsteiger made 500 appearances for Bayern, scoring 68 goals and winning 22 titles, including the 2013 Champions League title and eight Bundesliga titles.

He walked out before kick-off with the words "Basti is Back" written in giant letters across the main stand.

He was presented with a giant framed photo montage of his key moments with Bayern, but the gifts, accolades and praise were heaped on Schweinsteiger long before kick-off in Munich.

He was awarded with the Bavarian Order of Merit on Sunday and then made the 18th member of Bayern's Hall of Fame at the club's museum.

Schweinsteiger returned the honor by donating to the club his 2014 World Cup winners' medal -- when his magnificent display in the Rio de Janeiro final helped Germany to a 1-0 extra-time win over Argentina.