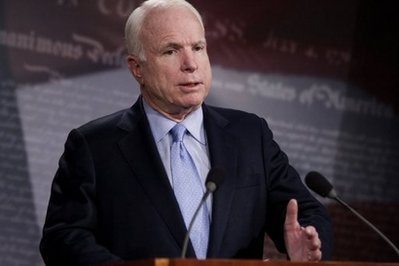 The death of senator John McCain has left his Republican party ever more firmly in the hands of Donald Trump, without a voice willing to challenge the president's most extreme statements and policies.

Back to work in full Tuesday following McCain's death, few senators displayed any appetite for taking on his role of the party's principled critic of the scandal-plagued president.

Instead, with Trump still highly popular with the party's base and Republican control of Congress under the gun in November midterm elections, Senate Republicans appeared likely to fall in line behind the White House.

McCain's death could give Trump even greater leverage over a rightward-tilting Republican party as he fights for his political life against the Russia meddling and obstruction investigations.

Trump has shown in some pre-election primaries that his voice can still rouse conservative voters to the polls in support of a candidate, though it remains uncertain how that will play in the November 6 vote, in which one-third of the 100 senators and all seats in the House of Representatives are up for grabs.

Democrats as well as Republicans were effusive in their praise of McCain as they returned to Congress Monday evening, celebrating his storied military career and 31 years representing Arizona in the U.S. Senate.

In a bitterly fractured Washington, McCain feistily stood up against extremism and worked across party lines to build consensus in a Senate split 51-49 for Republicans.

"He didn't vote to score political points, he voted to make democracy work," Tom Perez, the chairman of the Democratic National Committee, wrote in a tribute Tuesday.

"In stark relief to what now passes for our politics, he continues to serve as a beacon to who we are and who we can be when we are at our best," fellow Republican Senator Jeff Flake said on the Senate floor.

"We owe it to his memory to try to be more like him."

Yet it remains unclear who is ready to accept that mantle.

McCain, who will be buried Sunday, is likely to be replaced by a more conservative, toe-the-line appointee. Flake, another relative moderate in the party, is retiring.

And Senator Susan Collins, who many have looked to resist the president's most extreme tendencies, appeared to be uncomfortable when his torch was offered to her.

"Indeed, a Democratic senator just spoke to me on the floor and was very kind and said, 'You know we're all looking to you now,'" she said late Monday.

"But I would not begin to compare myself to John McCain, I really wouldn't. His strength and resilience were extraordinary."

The deep enmity between Trump and McCain was clear in the fracas over whether the White House would keep its flags at half-staff in McCain's honor.

Trump only finally agreed to honor McCain Monday after heavy pressure from politicians, veterans groups and reportedly his staff.

Meanwhile, McCain left a posthumous message that took a dig at the president.

"We weaken our greatness when we confuse our patriotism with tribal rivalries that have sown resentment and hatred and violence in all the corners of the globe," McCain said.

Lindsey Graham, a senior Republican senator close to McCain ideologically, said Tuesday in the Senate that the lesson he learned from his "good friend" was that "when good ignores evil, it may be convenient bit it seldom works."

He added: "Don't look to me to replace this man. Look to me to remember what he was all about and try to follow in his footsteps."

"If you want to help the country, be more like John McCain."

"He didn't vote to score political points, he voted to make democracy work," Tom Perez, the chairman of the Democratic National Committee, wrote in a tribute Tuesday.

The only reason the democrats shared their grief over McCain was simply to reaffirm their hatred to Trump.