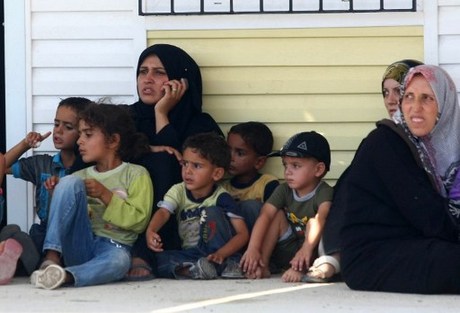 An expected government assault on Syria's last rebel-held province, Idlib, and surrounding areas could displace as many as 800,000 people already in a dire humanitarian situation, the U.N. warned Wednesday.

In an interview with AFP, a representative of the United Nations Humanitarian Coordination Office (OCHA) in Damascus said an attack could be catastrophic.

"We fear that -- should there be an increased escalation of hostilities in that area -- up to 800,000 people could be displaced and that the number of people who are in need of humanitarian assistance, which is already high, could increase dramatically," said Linda Tom.

Idlib in northwest Syria along the border with Turkey is the last province still held by the country's beleaguered rebels.

An estimated three million people live in Idlib and adjacent rebel-held territory, many of them already displaced from other parts of Syria since the conflict erupted in 2011.

Most rely heavily on food, medicine and other humanitarian aid brought in across the Turkish border by the U.N. and charity groups.

Tom said she feared that assistance "will be compromised" by clashes, further threatening civilians in the densely-populated territory.

"For aid workers who are working in this area, they might become displaced as well and that would compromise the delivery of services to people in need," she said.

"It's just the immense scale of the humanitarian catastrophe that could take place in the Idlib area," she added.

President Bashar al-Assad is looking to recapture Idlib to cap a string of major regime victories in recent months, including around Damascus and the south, that have put him in control of around two-thirds of the country.

Those offensives have forced hundreds of thousands of people to flee their homes across Syria, where a total of six million remain internally displaced.

On Tuesday in New York, several U.N. Security Council ambassadors voiced deep concern over the fate of civilians in Idlib.

Swedish envoy Carl Skau said an assault "would have catastrophic consequences and can lead to a humanitarian disaster".

Experts have said Syrian troops could instead opt for a more limited operation on the province's periphery, where hundreds of thousands live.