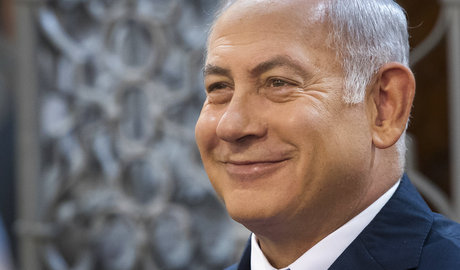 Israeli Prime Minister Benjamin Netanyahu on Sunday lauded the U.S. decision to halt funding for the U.N. agency for Palestinian refugees, arguing the body perpetuates the problem instead of solving it.

"The U.S. has done a very important thing by halting the financing for the refugee perpetuation agency known as UNRWA," Netanyahu said while visiting a school for the start of the academic year.

"It is finally beginning to resolve the problem."

He added that the money "must be taken and used to genuinely help rehabilitate the refugees, the true number of which is much smaller than the number reported by UNRWA."

The United States announced Friday it was ending funding to UNRWA, or the United Nations Relief and Works Agency for Palestinian refugees.

Washington has long been the largest single donor to the agency, providing more than $350 million a year.

The decision followed another one by Washington on August 24 to cancel more than $200 million in bilateral aid to Palestinians in Gaza and the West Bank.

Palestinian leaders have harshly condemned the U.S. moves, accusing U.S. President Donald Trump's administration of seeking to "liquidate" their cause.

Trump's recognition of the disputed city of Jerusalem as Israel's capital in December had already led Palestinian leaders to cut off contact with the White House.

The aid cuts have led to concerns over the future of the U.N. agency that provides services to Palestinian refugees and their descendants, with some five million people eligible.

Its services include operating 711 schools for 526,000 pupils in the Palestinian territories, Jordan, Lebanon and Syria.

The cut in bilateral aid will affect humanitarian programs in areas such as health care, particularly in the impoverished Gaza Strip, among others.

The issue of Palestinian refugees has long been a major sticking point in peace efforts.

More than 750,000 Palestinians fled or were expelled during the 1948 war surrounding Israel's creation.

They and their descendants are now classified as refugees who fall under UNRWA's remit.

Palestinian leaders continue to call for at least some of them to be allowed to return to their former homes now inside Israel under any peace deal.

Israel says Palestinians must give up the so-called right of return and that allowing descendants of refugees to inherit their status only perpetuates the problem instead of solving it.

Palestinian who was in the leadership of Hamas speaks out at the United Nations: