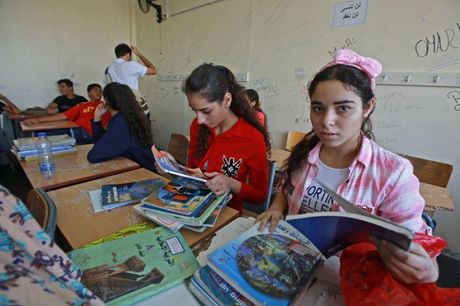 It's back to school for Palestinian refugees in Lebanon, but funding cuts to the UN agency supporting them means students may only be in class until the end of month.

One by one, students in the dilapidated UN-run Haifa school in a suburb of the Lebanese capital stand up to receive their textbooks for the fresh academic year.

Books on physics, mathematics, geography, chemistry -- some new, but most used and worn -- are handed to the solemn eighth-graders sitting at chipped wooden desks.

With no air conditioning in the classrooms, the late-morning heat is stifling.

Palestinian flags hang from the ceiling and most of the walls are covered in doodles and Arabic graffiti: "Neymar," in tribute to the popular Brazilian footballer, "You are the darling of my heart," and "Palestine".

Across the region, more than half a million Palestinian students may lose access to their education after the United States said it would stop backing the United Nations agency for Palestinian refugees (UNRWA).

Washington was UNRWA's top contributor for years, providing more than $350 million a year to the agency that assists more than five million Palestinian refugees around the region.

On Friday, the US announced it would pull all funding to the "irredeemably flawed operation".

To keep its essential operations running until the end of the year, UNRWA says it needs $217 million -- otherwise health centres and schools may be forced to close.

In Lebanon alone, 66 UNRWA-run schools could shut by the end of September, depriving some 38,000 Palestinian students of an education.

- 'Where will our kids go?' -That worry hangs in the air as parents gather with their children for the first day of classes at the Haifa school.

"It's a plot against the future of our children," says Ramadan Ibrahim, who hails from the Palestinian camp of Yarmuk in Syria's capital.

He fled Syria's war six years ago with his wife and children, coming to settle in Beirut, and Yarmuk has since been flattened by fighting between Syria's regime, rebels, and jihadists.

Ibrahim's eldest son is in Germany, and the next two are working odd jobs to provide for the family.

Only his youngest, 14-year-old Abdel Rahman, is in school.

"It would be good to have at least one educated person in the family," says their 53-year-old father, was is balding but sports a scratchy beard.

"Where will our kids go? To work in coffee shops? I see boys of seven or eight who are working in cafes because their parents cannot send them to school," he tells AFP.

An estimated 174,000 Palestinians live in Lebanon, according to a census by national authorities last year, although the UN estimates there are tens of thousands more.

They are barred from nearly 20 jobs, including many that require higher education like lawyer, doctor, and engineer.

With no way out, generations have been stuck living in the dozen squalid, densely populated and poorly serviced refugee camps across the country.

- No alternative -The future looks dire for them -- and for UNRWA, says the agency's country chief Claudio Cordone.

"There isn't an alternative to this provision of services to these people."

"The ceiling collapsed in one class. There's damage in other parts of the school that need to be fixed," says the 52-year-old.

Her family is originally from the ethnically mixed Israeli city of Haifa but she was born in Lebanon and has taught English in UNRWA schools since 2003.

"We all have families that depend on us. This worries employees," says Issa, who supports her mother and her orphaned nephew.

"There are entire families that depend on UNRWA and all of a sudden there will be kids that find themselves without schools," she says.

Fatima Hamid, a 33-year-old Palestinian refugee, never got to finish her studies and was hoping for something different for her daughters.

She lived in Libya before coming to Lebanon, where she had her daughters Rana, 14, and Rawan, 10.

"It's a huge catastrophe," says Hamid.

"We're afraid. The whole world knows the situation for Palestinians. If the schools close, our children won't have a future -- they'll end up in the streets."

Stop having that many kids would be a good start, especially if you can't feed and educate them. This is the loser's mentality the shia in South Lebanon have, then they join a terrorist militia to feed their families.

In most countries, the host country makes certain that the children of refugees are educated at the cost of the country. (Just look at how many refugee children are in state schools in Germany, UK etc.) Why can't Lebanon be in that situation?

When European Jews were put in concentration and extermination camps, they were fed by the nazis, weren’t they? I mean 100 grams rations per person. It’s beyond me how Israelis are treating Palestinians even worse than they were 75 years ago. These Palestinians used to be Jews centuries ago and simply adapted to the religion of the military powers occupying Palestine. Why the evilness?

Germany and the UK do not live next to Israel that periodically invades them that's the first difference Phillipo, the second reason is that Lebanon does not get unconditional loan guarantees such as Israel does. The last is Lebanon is not an independent country as Syria has never recognized Lebanon's independence and will not let it manage its affairs. This sad image is a reflection of the mismanagement of Palestinian leadership and how this is effecting the youth...their future. On the other hand the Mullahs love this as it means more control for them over the uneducated masses. And the cycle continues.