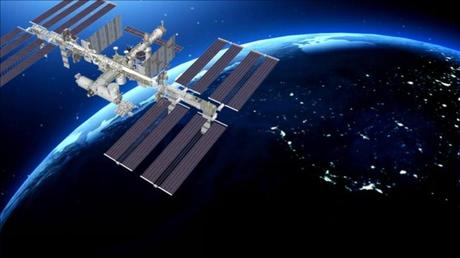 Russia launched checks Tuesday after its space chief said an air leak on the International Space Station last week could have been deliberate sabotage.

Space agency chief Dmitry Rogozin said the hole detected Thursday in a Russian space craft docked at the orbiting station was caused by a drill and could have been done deliberately, either back on Earth or by astronauts in space.

Astronauts used tape to seal the leak after it caused a small loss of pressure that was not life-threatening.

"There were several attempts at drilling," Rogozin said late Monday in televised comments, adding that the drill appeared to have been held by a "wavering hand".

"What is this: a production defect or some premeditated actions?" he asked.

"We are checking the Earth version. But there is another version that we do not rule out: deliberate interference in space."

A state commission will seek to identify the culprit by name, Rogozin said, calling this a "matter of honor" for Russia's Energiya space manufacturing company that made the Soyuz.

Asked for comment on allegations of possible sabotage, a NASA spokeswoman referred all questions to the Russian space agency which is overseeing the commission's analysis.

Rogozin had said the hole in the side of the ship used to ferry astronauts was most likely caused from outside by a tiny meteorite, but later admitted it had been ruled out.

A Russian MP who is a former cosmonaut suggested that a psychologically disturbed astronaut could have done it to force an early return home.

"We're all human, and anyone might want to go home, but this method is really low," Maxim Surayev of President Vladimir Putin's ruling party, told RIA Novosti state news agency,

"If a cosmonaut pulled this strange stunt -- and that can't be ruled out -- it's really bad," said Surayev, who spent two stints on the ISS.

"I wish to God that this is a production defect, although that's very sad, too -- there's been nothing like this in the history of Soyuz ships."

Alexander Zheleznyakov, a former space industry engineer and author, told TASS state news agency however that drilling the hole in zero gravity would be nearly impossible in that part of the spacecraft.

"Why would cosmonauts do it?" he asked.

The hole is in a section of the Soyuz ship that will not be used to carry astronauts back to Earth.

A space industry source told TASS that the spacecraft could have been damaged during testing at Baikonur cosmodrome in Kazakhstan after passing initial checks and the mistake was then hastily covered up.

"Someone messed up and then got scared and sealed up the hole," the source speculated, but then the sealant "dried up and fell off" when the Soyuz reached the ISS.

Energiya will carry out checks for possible defects on all Soyuz ships and Progress unmanned ships used for cargo at its production site outside Moscow and at Baikonur, RIA Novosti reported Tuesday, citing a space industry source.

The ISS is one of the few areas of Russia-U.S. cooperation that remains unaffected by the slump in relations  and Washington's sanctions.

Currently on the ISS are two cosmonauts from Russia, three NASA astronauts and a German from the European Space Agency.