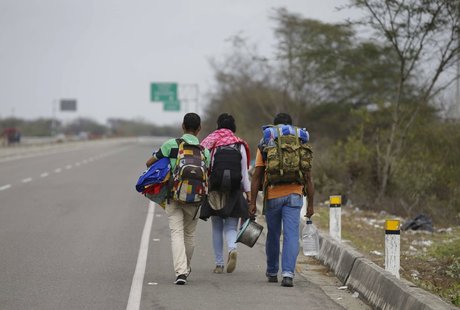 Hundreds of thousands of people have fled an economic collapse in Venezuela that has resulted in food and medicine shortages as well as failing public services.

Following two days of meetings hosted by Ecuador, the signatories called for "the creation of a humanitarian assistance mechanism that will allow the critical situation to be alleviated" and would target "the source" of "affected citizens."

The group also called on Venezuela to "accept the cooperation of governments in the region and international organizations" to care for the communities of their nations living there.

Maduro's right-hand man, Diosdado Cabello hit back, calling the group "disgusting" and "shameful" and accused it of "asking for money."

Of the 13 countries meeting in Quito, only Venezuela's left-wing ally Bolivia refused to sign the document, while the Dominican Republic was unable to do so immediately for administrative reasons.

The group called on Maduro to guarantee migrants wishing to leave access to travel documents, something that has become increasingly difficult in a country suffering paper shortages.

"I think we're sending an important message to the millions of Venezuelans travelling around our region," said Chile's director of consular affairs and immigration, Raul Sanhueza.

"We're telling them that we're going to accept their expired documents for migratory purposes."

According to the United Nations, some 1.6 million people have left Venezuela since 2015, although Maduro claimed on Monday that just 600,000 have emigrated over the last two years.

The country is suffering a fourth year of recession, while the International Monetary Fund says inflation will reach one million percent this year.

Migrants have faced arduous journeys, often on foot, to try to find shelter in nearby countries.

"Those who have left didn't go to save Venezuela, they went for a matter of individualism," said Cabello during a session of the leftist regime-dominated assembly, which he heads.

"They sold homes given to them by the Bolivarian revolution, (also) cars and computers."

Cabello described images of Venezuelans fleeing on foot as a "Hollywood-style campaign" and "magical realism" like a book by the late and renown Colombian author Gabriel Garcia Marquez.

Colombia says it has given temporary residence to 870,000 Venezuelans, while Peru claims more than 400,000 have entered its country.

Such has been the unprecedented influx that Peru introduced tighter border controls last month to stem some of the tide.

But it followed that up by offering Venezuelans lacking the necessary documentation to migrate legally a simplified process for claiming asylum.

A group of just over a thousand Venezuelan migrants were driven back over the border from northwestern Brazil last month by an angry mob following a rumor that a group of newcomers had badly beaten a local shopkeeper.

Some Venezuelans have been reduced to sleeping in the streets in host countries while relying on handouts in order to eat.

Venezuela denies it has a migration problem and has accused the United Nations and "enemy countries" of exaggerating the issue.

Vice President Delcy Rodriguez said on Monday that unnamed U.N. officials have been portraying "a normal migratory flow as a humanitarian crisis to justify an intervention."

On Wednesday, the Organization of American States is due to meet in Washington to discuss the migration crisis.