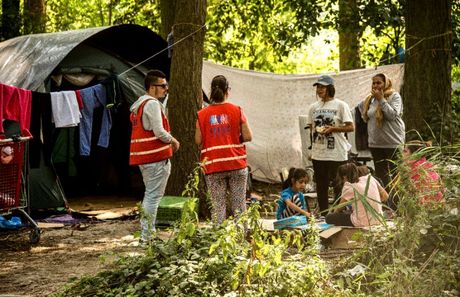 Police moved in to clear 500 migrants from a camp near the French port city of Dunkirk, along the English Channel where many gather hoping to stow away on trucks or ferries heading to Britain, officials said Thursday.

Around 200 officers took part in the operation which was going smoothly at Grande-Synthe, just outside the city, regional government official Eric Etienne told AFP.

Authorities estimate that 95 percent of the people at the site are Iraqi Kurds.

Etienne said the evacuation reflected the government's determination not to allow new "shantytowns" along France's northern coast of migrants trying to reach Britain.

A heavy police presence was deplopyed to prevent a repeated of camps like the huge "Jungle" site near Calais, where more than 10,000 people were living before it was razed in 2016.

An estimated 800 migrants are currently in Grande-Synthe, municipal officials say.

Those evacuated Tuesday will be offered the chance to apply for asylum in France or be brought to police centres for ID checks.

It also makes it easier to expel people whose applications are turned down, a move denounced by critics as an attempt to limit new arrivals.