Families of Israelis Missing in Gaza Demand Their Return 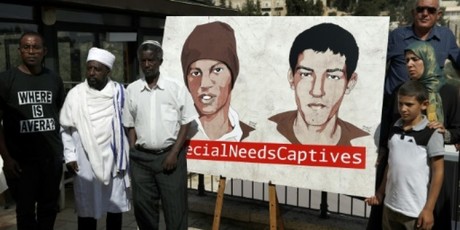 The families of two Israelis believed to be held captive in Gaza by its Hamas rulers demanded Thursday that the Islamist movement return their loved ones.

Ethiopian-born Avera Mengistu was filmed by an Israeli security camera climbing the frontier fence with the Gaza Strip in September 2014.

Human Rights Watch said it was told by an Israeli official that Hisham al-Sayed, a Muslim Bedouin, was picked up by monitoring equipment as he crossed the border into Gaza in April 2015.

Both are said to be mentally unstable.

"Hisham's problem is he is sick psychologically," his father Shaaban al-Sayed told a press conference on Thursday.

"We want to send a message to the Palestinian people in Gaza to speak to Hamas, put pressure on Hamas," to free him, he said in Arabic.

Ilan Mengistu appealed to Hamas' Gaza leader Yahya Sinwar to "act like a human being, to consider my brother Avera's mental condition, to consider the family's suffering, and to release Avera and Hisham today."

He said that his brother was being held as a bargaining chip to try and win the release of Hamas prisoners held by Israel.

"A man with special needs is being held hostage," Mengistu said in Hebrew. "How cruel."

Israel does not allow its citizens to enter Gaza, partly over fears that they may be used as leverage to demand concessions.

Two Israeli soldiers, Oron Shaul and Hadar Goldin, are believed to have been killed in the 2014 war in Gaza and their remains held by Hamas.

The movement has suggested it is willing to trade the bodies in a deal similar to the 2011 swap that saw Israeli soldier Gilad Shalit freed in exchange for more than 1,000 Palestinians in Israeli prisons.

Around 6,500 Palestinians are currently in Israeli jails, according to the Palestinian Prisoners' Club.