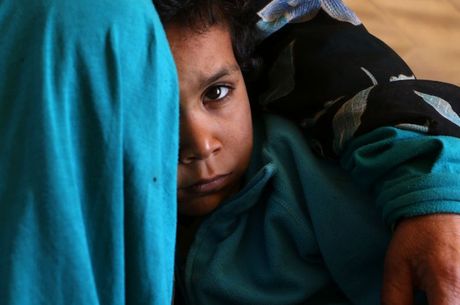 In northwestern Syria, 68-year-old Abu Khaled was among dozens to have set up camp in a field, hoping that Turkish soldiers nearby would shield him from bombardment by Bashar al-Assad's regime.

In the country's last major rebel bastion of Idlib province on Turkey's border, civilians are scrambling to protect themselves from a possible Russia-backed government offensive.

Fears have mounted that any attack on the region of nearly three million people could spark one of the worst humanitarian disasters in Syria's seven-year war.

Dressed in a long white robe and wearing a chequered red-and-white scarf of his head, Abu Khaled sat by his tent pitched in a field in the southeast of Idlib.

Around him, children played between poles covered in flowery bedsheets and pitched for shelter in the red earth.

One dangled back and forth on an improvised swing, while a woman prepared food in a large saucepan on an open fire.

"There was bombardment on our villages so we came here, near the Turkish outpost," Abu Khaled said, crouched on the ground.

"It's to protect us," he said, referring to the monitors deployed by rebel backer Turkey just hundreds of metres (yards) away.

Last year, Ankara, as well as regime allies Moscow and Tehran, labelled Idlib a "de-escalation zone" under a deal that saw Turkish monitoring posts set up in the province.

The United Nations has warned that any regime attack on Idlib could displace up to 800,000 people, and urged key players to intervene to avoid a "bloodbath".

- Hospitals plan -On Friday, the presidents of Turkey, Russia and Iran are set the meet in Tehran in a bid to determine Idlib's fate.

Russia-backed regime troops have massed around the province in recent weeks, after ousting rebels and jihadists from other parts of the country.

Moscow says it is bent on fighting Hayat Tahrir al-Sham, a group led by Syria's former Al-Qaeda affiliate that controls more than half of the province.

Turkey-backed rebels hold much of the rest, while the regime controls a southeastern slither.

Around half of the residents in Idlib and adjacent areas have lost their homes in the conflict, the UN says, and many already depend on humanitarian aid.

The timing and scope of any attack remain unclear, but healthcare and aid workers are preparing to cope for the worst.

At a hospital in the provincial capital of Idlib this week, staff worked as usual.

Two doctors wearing grey scrubs operated on a patient, while a staff member tested a girl's eyesight in another room.

But their hospital, like others in the province, is drawing up a contingency plan in case the surrounding area comes under attack.

"Every hospital needs to have a special emergency plan," said Mustafa al-Eido, the deputy head of healthcare in Idlib province.

With no means to defend the hospitals against regime or Russian air strikes, they would have to downsize staff or redeploy doctors and nurses to other locations, Eido said.

"You can't fortify against Russian military equipment," he added.

In the first six months of this year, 38 attacks hit medical infrastructure in Idlib province, most blamed on the government or its ally Russia, according to the UN.

- More displaced? -To best respond to air strikes across the province, a joint operations committee has been set up to coordinate between the health service's 50 ambulances and rescue groups such as the White Helmets, Eido said.

Hospitals are grappling with severe medicine shortages, he said, and also trying to stock up on supplies to deal with any chemical attack.

Assad's regime has repeatedly been accused of using chemical weapons during the conflict, including in an attack that killed more than 80 people in Idlib's town of Khan Sheikhun last year.

Since then, staff from 16 hospitals in Idlib and adjacent areas have trained with the World Health Organization in Turkey on how to best help the victims of any toxic attack, Eido said.

Aid workers too are getting ready to help.

Just outside Idlib province, at a camp for the displaced, its director Yussef Nur inspected a backup stash of thin foam mattresses, woollen blankets and large outdoor plastic rugs.

"We've planned for any sudden displacement of people," he said.

Outside, rows of white tents stood bright in the summer sun. One man reclined on a thin mattress in the shade.

"We now have around 700 people at the camp" in Mizanaz in the neighbouring province of Aleppo, he said.