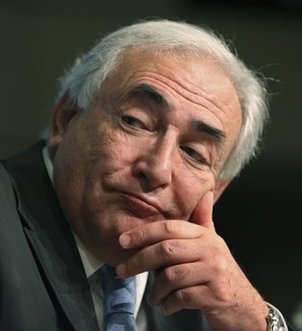 The world is less well equipped to manage a major financial crisis today than it was a decade ago, according to Dominique Strauss-Kahn, a former chief of the International Monetary Fund (IMF).

In an interview with AFP, the now-disgraced Strauss-Kahn -- who ran the fund at the height of the 2008 financial meltdown -- also said rising populism across the world is a direct result of the crisis.

Strauss-Kahn resigned as head of the IMF in 2011 after being accused of attempted rape in New York, although the charges were later dropped. He settled a subsequent civil suit, reportedly with more than $1.5 million.

Q: When did you become aware that a big crisis was brewing?

A: When I joined the IMF on Nov 1, 2007, it became clear quite quickly that things were not going well. That is why in January 2008, in Davos, I made a statement that made a bit of noise, asking for a global stimulus package worth two percent of each country's GDP. In April 2008, during the IMF's spring meetings, we released the figure of $1,000 billion that banks needed for their recapitalisation.

Q: Did the Bush administration grasp the danger of Lehman Brothers going bankrupt?

A: No, and that is why Treasury Secretary Henry Paulson decided not to save Lehman, because he wanted to make an example of it in the name of moral hazard. Like everybody else, he considerably underestimated the consequences. Allowing Lehman to go under was a serious mistake. Especially because only a week later they were forced to save the insurer AIG, which was much bigger.

Q: Ten years on, are we better equipped to deal with a crisis of such a magnitude?

A: No. We have made some progress, particularly in the area of banks' capital adequacy ratios. But that is not nearly enough. Imagine Deutsche Bank suddenly finding itself in difficulty. The eight percent of capital it has at its disposal are not going to be enough to solve the problem. The truth is that we are less well prepared now. Regulations are insufficient.

A: After 2012-2013 we stopped talking about the need to regulate the economy, for example concerning the size of banks, or concerning rating agencies. We backtracked, which is why I am pessimistic about our preparedness. We have a non-thinking attitude towards globalisation and that does not yield positive results.

Q: Do we still have international coordination?

A: Coordination is mostly gone. Nobody plays that role anymore. Not the IMF and not the EU, and the United States president's policies are not helping. As a result, the mechanism that was created at the G20, which was very helpful because it involved emerging countries, has fallen apart. Ten years ago, governments accepted leaving that role to the IMF. I'm not sure it is able to play it today, but the future will tell.

Q: Do you believe that Donald Trump's election is a consequence of the crisis?

I believe so. I'm not saying that there was a single reason for Trump's election, but today's political situation is not unconnected to the crisis we lived through, both in the U.S. with Trump and in Europe.

A: One of the consequences of the crisis has been completely underestimated, in my opinion: the populism that is appearing everywhere is the direct outcome of the crisis and of the way that it was handled after 2011/2012, by favouring solutions that were going to increase inequalities. Quantitative easing (by which central banks inject liquidity into the banking system) was useful and welcome. But it is a policy that is basically designed to bail out the financial system, and therefore serves the richest people on the planet.

When there's a fire, firemen intervene and there is water everywhere. But then you need to mop up, which we didn't do. And because this water flowed into the pockets of some, and not of everyone, there was a surge in inequality.