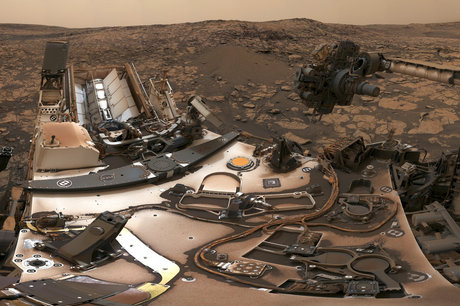 NASA released the panorama this week. A thin layer of dust is visible on Curiosity , the result of a storm that enveloped Mars this summer. The darkish sky indicates dust still clogging the atmosphere in August, when the panorama was shot by Curiosity's mast camera. The rover had just drilled for a new rock sample.

Curiosity is nuclear-powered and therefore unaffected by the lack of sunlight. NASA's older rover Opportunity, however, relies on solar power and has been silent since June. Flight controllers hope as the Martian sky continues to clear, Opportunity will get back in contact. But after almost 15 years exploring the red planet, Opportunity may not have the strength or ability for a comeback.