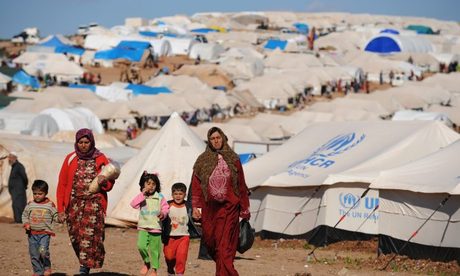 The U.N. Commission of Inquiry says Syria this year has witnessed levels of internal displacement not seen before in the seven-year conflict.

The agency said in a report released Wednesday that over 1 million Syrian men, women and children have been displaced so far this year "with most now living in dire conditions."

Syrian government forces backed by Russia and Iran captured wide areas around the country from insurgents earlier this year.

The areas include southern regions on the fronts with Jordan and the Israeli-occupied Golan Heights as well as eastern suburbs of Damascus known as eastern Ghouta.

The agency also warns that a possible offensive on the northwestern province of Idlib "would generate a catastrophic" humanitarian crisis.

Government forces have been massing troops on the edge of Idlib in preparation for an offensive on the last major rebel stronghold in Syria.

Why does the UN not charge the countries involved? Such as Iran, Turkey, Russia and Qatar for financing and aiding this war?

Lol, maybe because half of the UN funded it too?