Israel Army Moves in on Palestinian Village Earmarked for Demolition 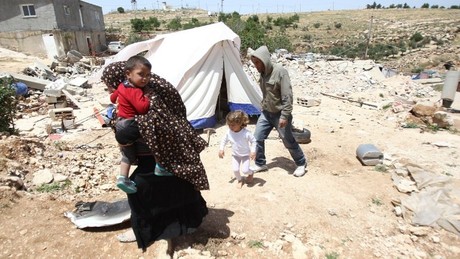 Israeli border police removed caravans on Thursday from near a Bedouin village in the occupied West Bank, which they have orders to demolish despite international criticism, officials said.

The pre-dawn operation on the outskirts of Khan al-Ahmar raised fears among the village's 200 residents that its demolition would occur soon.

The border police took away five caravans which had been pitched by activists campaigning against the village's demolition.

They blocked off access to the village during the operation and there were no clashes, an AFP photographer said.

The Israeli defence ministry body which oversees civilian activities in the Palestinian territories said the five caravans had been pitched illegally over the past few days.

"The erection of these structures was advanced by representatives of the Palestinian Authority in protest and defiance of the decision of the (Israeli) High Court of Justice, and in opposition to the enforcement of Israeli law in Area C," COGAT said.

It was referring to the 61 percent of the West Bank where Israel exercises full civil as well as military authority.

On September 5, Israel's supreme court upheld an order to raze the village on grounds that it was built without the proper permits.

It is however extremely rare for Palestinians to obtain Israeli permits to build in Area C of the West Bank, where Khan al-Ahmar is situated.

A temporary stay against the village's demolition expired on Wednesday, meaning the army can implement the court order when it sees fit.

A village spokesman, Abu Khamis, speculated that Israel may hold off on demolition for now to avoid sparking international criticism ahead of the UN General Assembly later this month.

The village is located in a strategic spot near Israeli settlements and along a road leading to the Dead Sea.

There have been warnings that continued settlement building in the area would eventually divide the West Bank in two, dealing a death blow to any remaining hopes of a two-state solution.

"Over there, there are a number of settlements allowed to grow naturally -- the number of residents naturally -- but here we are banned from doing a single thing," Abu Khamis said.

"That is racism, that is apartheid."

On Monday, Britain, France, Germany, Italy and Spain issued a renewed call for Israel not to demolish the village, warning of the consequences for residents as well as "the prospects of the two-state solution".

Israeli authorities have offered alternative sites for Khan al-Ahmar residents, but villagers say the first was near a rubbish dump and the latest close to a sewage treatment plant.

that's exactly what the iranian terror militia aka hezbollah is doing in Syrian villages and cities.

The difference is that Syrian displaced usually return once fighting is over.

Your Zionist allies want the Palestinians removed for good.

But very very soon as the enemy is cutting them left and right, there wont be any possibility to have any state...

Back to z subject poor Bedouin, ok send them to Leb, for sure we can find space for them!

As long as the Arabs are growing in numbers within Irael, it doesn't matter what the Zionists do or don't, unless they want to start gassing Arabs en masse.