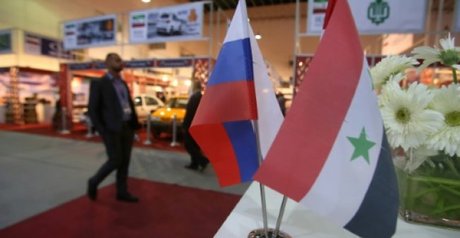 Companies from dozens of countries are showing their wares at the Damascus International Fair this week, but those from two in particular are getting special treatment -- Russia and Iran.

Firms from the top two wartime allies of Syria's government are set up in an entirely separate building, hinting at the preferred status they hope to enjoy as the country tries to transition into reconstruction.

A flatscreen television in the Russian wing plays a sleek advertisement for Libena Agro Build, a metalworking company that produces farming equipment and grain silos.

"Foreign companies are scrambling and competing to invest in Syria, but Russia's got preference," says its regional representative, Lebanese-Russian national Leba Shehadeh.

"We were the ones defending Syria politically and militarily, so we expect the lion's share of the economy and of the reconstruction phase."

He flips through a pamphlet of irrigation products, metal recycling services, moulds, and more.

"We're here so that, together, we can draw the plan for rebuilding this country."

Seven years since war first broke out, President Bashar al-Assad has managed to recapture around two-thirds of Syria, with help from both Tehran and Moscow.

Iranian "military advisers" and Tehran-backed militias have supported troops on the ground, and Russian warplanes have battered rebel targets from the sky for the past three years.

But fighting has left Syria in ruins, with the United Nations saying destruction has cost the country close to $400 billion.

Assad has pledged to make reconstruction his top priority, saying Syria's "allies" would be the only ones allowed to take part.

Even during war, Russian companies have invested in Syria's oil, gas and mining sectors and won contracts to build flour mills and water-pumping stations.

And on Friday, at the fair's opening, the Russian and Syrian ministries of industry inked a memorandum of understanding on future cooperation.

The Russian ministry had organised a delegation of investors to attend the fair, including representatives of Romax, a firm that produces storage silos and is involved in transportation and shipping.

"The Syrian market is attractive for investment," says its representative at the fair, Aron Levashov.

"We're finding a window, a gate for Russia towards the Mediterranean sea, and from there to Europe and Africa," he tells AFP, speaking in Russian through an interpreter.

He says Russia's "familiarity with the situation on the ground, the markets, the depth and scope of destruction" gave it a better understanding of Syria's economic needs.

"Russia proved herself with a show of force in the air, and it's continuing its political support. We should take advantage of the space afforded to us to crystallise our economic role," Levashov tells AFP.

Companies from 25 countries, as well as officials from another 23 are taking part in the fair, Syrian state media said.

Around 50 Russian firms are being represented, and Iran has made an equally strong showing.

Mohammad Reza Khanzad, who runs the Iranian pavilion at the expo, says the wing "includes 50 Iranian companies, among them 32 firms specialising in reconstruction" -- compared with 31 firms in total last year.

"The rest are in various industries like car production, homeware, programming, reconstruction materials, handmade carpets and agriculture," he says.

At a nearby table, Iranian businessman Mehdi Qawwam, 38, is smoothly pitching his construction firm Maskan Omran to three Syrian entrepreneurs in Farsi through a translator.

"After Syria's war, the market will need companies specialised in construction and will benefit from Iranians to rebuild an even stronger market," he says.

Dressed in a grey suit, Qawwam concludes his sit-down and tucks newly acquired business cards into his suitcase.

"We reached some preliminary agreements to facilitate the entry of Iranian goods exclusive to our company into Syria, and in the coming phases we'll have meetings in Tehran or Damascus to confirm those deals," he says.

Strolling through the expo, he waves to friends and rivals alike.

"Syria is one of the few countries that accepts our products in the wake of the US sanctions" reimposed by Washington last month, he says.

"These sanctions must not affect us, because the relationship between our two countries is like one between brothers."