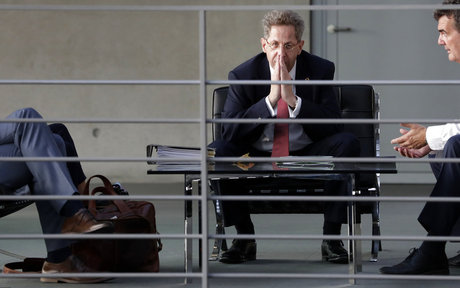 Germany's top spy faced fresh pressure Thursday over his allegedly proximity to the AfD, as an MP of the far-right party said he gave the group official figures on Islamists before they were published.

The allegation was immediately rejected by Germany's domestic spy agency (BfV) which said its chief Hans-Georg Maassen holds talks with members of all parties in parliament at the request of the Interior Ministry and did not pass on information illegally.

Maassen has been caught in the headlights after he directly contradicted Chancellor Angela Merkel in his assessment of anti-migrant protests in the city of Chemnitz.

Merkel had firmly condemned a "hunt against foreigners" backed by videos circulating on social media, but Maassen had questioned the authenticity of at least one of the clips.

For critics, Maassen's claim played into the hands of the far-right. Merkel's coalition partner, the centre-left SPD had called for him to step down.

Seehofer told parliament Thursday emphatically that Maassen "continues to have my trust in him as president of the Federal Office for the Protection of the Constitution" (BfV).

He argued that Maassen had "a convincing position against the right-wing radicalism."

But barely hours after receiving Seehofer's ringing endorsement, new questions arose over Maassen as AfD MP Stephan Brandner told public broadcaster ARD that the spy chief on June 13 handed him figures from his agency's latest annual report "that had not been published."

"We spoke about different figures that were in the report," said Brandner, adding that the data was related to Islamists deemed dangerous by the service as well as the agency's budget.

Rejecting the ARD report, a BfV spokesman said: "The report gives the impression that information or documents have been passed on illegally. That is of course not the case."

But Brandner's claim unleashed a new round of furore over Maassen's neutrality, as it also comes after allegations that the BfV chief met several times with the AfD's leadership to give them advice on how to avoid being placed under formal surveillance by his service.

"It's absolutely clear to the SPD leadership that Maassen has to go. Merkel must take action," he tweeted.