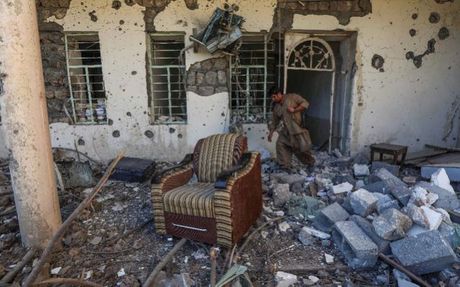 A man wearing a white surgeon's mask sprays red paint at pockmarks left in a white wall by shrapnel -- honoring comrades who died in an Iranian missile attack in Iraqi Kurdistan.

The man is a member of the Kurdistan Democratic Party of Iran, a rebel group based in northern Iraq's autonomous Kurdish region, whose headquarters were targeted by the missile attack on September 8.

At least 15 KDPI leaders and members were killed at the base in Koysinjaq, according to the rebels.

"The victims have obviously left a big hole", said KDPI Secretary General Mustafa Muludi, one of around 30 wounded in the strikes.

"We have suffered a great loss because (the dead leaders) had political experience and expertise," he said.

"We have always considered Iran a danger to us. This bombardment has made our fear stronger."

But Muludi said he was confident the KDPI would fill the leadership void.

Iran said the strikes were retaliation for repeated cross-border incursions by the "terrorist" group.

It was banned after the Islamic revolution of 1979.

Iran's armed forces chief of staff said on Tuesday that Kurdish leaders in Iraq had given assurances in the past that they would rein in the KDPI and other anti-Iran militants.

While Iran has called on Iraq to expel the rebels, Baghdad has called the missile strikes a violation of its sovereignty.

Kurds, a non-Arab ethnic group, have long agitated for their own state.

They number between 25 and 35 million people spread across Turkey, Syria, Iraq and Iran.

In Iran they make up around 10 percent of the population.