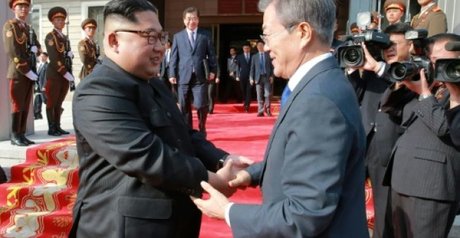 North and South Korea opened a joint liaison office in the Northern city of Kaesong on Friday as they knit closer ties ahead of President Moon Jae-in's visit to Pyongyang next week.

"A new chapter in history is open here today," South Korean unification minister Cho Myoung-gyon told a ceremony, calling the office "another symbol of peace jointly created by the South and the North".

The nuclear-armed North's chief delegate Ri Son Gwon responded in kind, calling it a "substantial fruit nourished by the people of the north and south".

The two Koreas have sought to pursue joint projects in multiple fields since the April summit between Moon and the North's leader Kim Jong Un in the Demilitarized Zone that divides the peninsula, even as US efforts to secure concrete progress towards Pyongyang's denuclearisation have stalled.

Moon will fly to the North's capital on Tuesday to meet with Kim as he seeks to rekindle the process.

The leaders' first meeting as well as key events during the three-day visit will be shown live on television, Moon's office said after a working-level meeting with the North on Friday.

Moon's trip will mark his third summit with Kim this year after he orchestrated a rapid diplomatic thaw on the peninsula and brokered June's Singapore summit between the North Korean leader and US President Donald Trump.

There Kim backed denuclearisation of the "Korean peninsula", but no details were agreed and Washington and Pyongyang have sparred since over what that means and how it will be achieved.

The North was "willing to denuclearise", Moon said Thursday, while the US was willing to "end hostile relations" and provide security guarantees, "but there is a blockage as both sides are demanding each other to act first".

Last month, Trump abruptly cancelled a planned visit by Secretary of State Mike Pompeo to Pyongyang, after the North condemned "gangster-like" demands for what it called its unilateral disarmament.

But Kim has since sent Trump a letter seeking a second summit and held a military parade for his country's 70th birthday without showing off any intercontinental ballistic missiles, prompting warm tweets from the US president and raising hopes of progress.

- Easing tensions -The liaison office stands in a city that was initially part of the South after Moscow and Washington divided Korea between them in the closing days of World War II, but found itself in the North after the 1950-53 Korean War, which ended in an armistice rather than a peace treaty.

The four-storey building includes separate Northern and Southern offices and a joint conference room, and Seoul's unification ministry said it would become a "round-the-clock consultation and communication channel" for advancing inter-Korean relations, improving ties between the US and the North, and easing military tensions.

It will be manned by some 20 officials each from both sides, headed by a vice minister-level appointment.

But critics have questioned whether the supplies provided to set it up are a violation of the multiple sanctions imposed on the North over its nuclear weapons and ballistic missile programmes.

Around 50 people from each side attended the ceremony, reports said, including Southern businessmen who used to run companies in the now-shuttered Kaesong industrial zone.

The project, where South Korean firms employed Northern staff, opened in 2004, when it was hailed as a symbol of inter-Korean economic cooperation and exchanges.

But then conservative President Park Geun-hye's government shuttered it in 2016 in response to the North's nuclear and missile tests.

It was the first time the businessmen had set foot in Kaesong for more than two years, but the unification ministry said their presence did not mean Seoul was seeking to reopen the park as sanctions were still in effect.