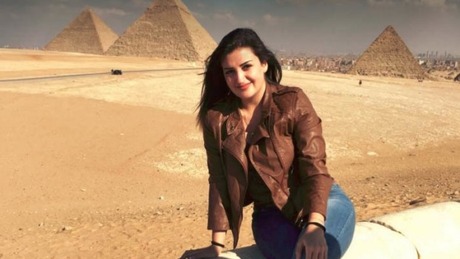 An Egyptian lawyer says a Lebanese woman who was jailed for insulting Egyptians in a video she posted online has been sentenced to a suspended one-year term and has left Egypt.

Emad Kamal tells The Associated Press on Friday that Mona el-Mazbouh has been released, just days after an appeals court reduced her sentence from eight years in prison.

Kamal says el-Mazbouh boarded a flight Thursday to her home country after she paid a fine of 10,700 Egyptian pounds (around $598).

Egypt arrested el-Mazbouh in May after she posted a 10-minute video in which she used profanities to describe her vacation in Cairo, where she says she was sexually harassed. She calls Egyptians the "dirtiest people" and Egypt "the country of pimps ... of beggars."

She is a national hero. She is right about everything she said about Egypt and its horrible people.

She was a political prisoner, where was Canada’s Trudeau? Why did he not open his hypocrit mouth?

Justin and SOS. I didn't realise she was Canadian.you guys are very smart Trudeau was asking for the release of a Canadian citizen . Your clown of a president should be the one to ask for the release of lebanese prisoners from anywhere that they are jailed without due process. You need to educate yourself a little before spouting nonsense.

Perhaps it is you who should educate yourself. The Canadian government and its representatives said they will be with Human Rights Everywhere and not just because the shia activist/terrorist in KSA also held Canadian citizenship.

Canadian Foreign Minister Chrystia Freeland refused to give ground in a dispute with Saudi Arabia on Monday, saying her country would "always stand up for human rights around the world".

I have the utmost respect for Mr. canadianleb for its love of comedy and human rights.

Canadian 'Human Rights' did not apply in her case.

The comments above explain a lot on why Lebanon is a banana republic. First I was born and raised in Canada with Lebanese parents and very proud of my heritage but fully "Canadianised". Secondly President of Lebanon elected or not he is still your president if you are Lebanese living in Lebanon. If you are comparing Canadian human rights to the third world countries of Iran, Lebanon, Egypt etc than let the Lebanese in Lebanon know and they should stop immigrating here. There are many cases of Canada human rights record good and bad so anytime you want do a search on the internet and compare that with Iran, KSA or any other country and see which comes ahead... good luck

When are the president and the government going to act to get Nizar Zakka released?!

that's because the southern troll has no life except reporting comments that expose his cult.

Don’t ask me why, yesterday I was commenting the two British death by E. coli in Egypt, it got deleted yet it was somehow educational therefor useful.

I guess it depends who is on duty to what comments gets deleted...
At any rate this ladys predicament should be a lesson to all about where to choose to go on vacation and what to say when your there.

I still do not understand why people go to Egypt? is it a function of simply having the easiest visa to travel to for some Lebanese? or do some simply like wallowing in a mire?

We have been used to see Lebanese not telling and not depecting the truth, so when it happens as here, people are shocked.