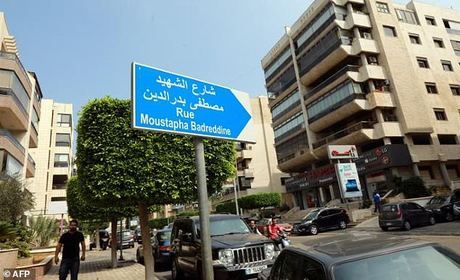 Naming a street after slain Hizbullah commander accused of masterminding the assassination of ex-prime minister Rafik Hariri is “provocative” since it synchronized with the beginning of closing argument of the Special Tribunal for Lebanon, Asharq al-Awsat daily reported on Wednesday.

“The political timing for naming a street after (Mustafa) Badreddine is provocative. It came in parallel with the launch of closing arguments of the STL. The issue is political and security-related rather than administrative,” as claimed, sources from the Interior Ministry told the daily on condition of anonymity.

The sources stressed that the Ghobeiri municipality should have waited for the interior ministry’s approval before taking the step.

The municipality of Ghobeiri, south of Beirut, recently renamed a street leading up to the Rafik Hariri National Hospital after Badreddine, one of the accused of masterminding the assassination of Hariri.

The backlash comes just days after the STL, a U.N.-backed court investigating the 2005 car bomb that killed Hariri and 22 others, began hearing closing arguments.

The Ghobeiri municipality says it submitted a request to the interior ministry one year ago to rename the street as is required by law, but that the lack of a response from the ministry within a month indicated tacit approval.

It insists its decision was "legal, normal, and legitimate."

The interior ministry announced on Monday it rejected the municipality honoring "one of the main people accused" of killing Hariri.

It said it would demand the street signs be removed.

The interior ministry said it would demand the street signs be removed.

I dare the interior ministry, the ISF, or the LAF to go in and remove the signs.

I pray all of dahieh becomes martyrs and every street in Lebanon carries a terrorist 'martyr's' name.

we are all on pins and needles:)

The Minister of Interior Provocativeness is just acting.

Why aren’t the culprits arrested ? The Ghobeiry municipality should get sanctioned, its funding cut until it complies.

good morning interior ministry are u really awake... i doubt..