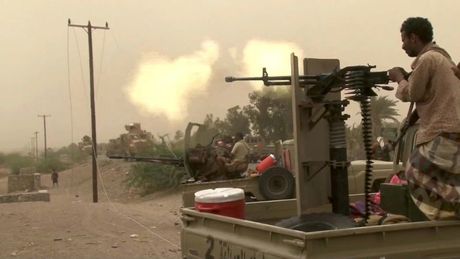 Fears were growing of a humanitarian crisis in Yemen after Saudi-backed government forces launched a series of attacks on rebel-held Hodeida, as a charity warned Wednesday that more than five million children were at risk of famine in the war-torn state.

The Huthi rebels accused the government and its Saudi-led allies of deliberately targeting food warehouses as the coalition said it had resumed a "military operation to liberate Hodeida and its port".

Pro-government forces and medical sources in Hodeida province told AFP that 40 Huthis had been killed around the embattled city since Monday night.

The fight for Hodeida, which the Huthis seized in 2014, was put on hold for 11 weeks as the United Nations struggled to bring warring parties to peace talks in Geneva.

But the talks collapsed earlier this month after the northern Yemeni rebels refused to attend.

The Red Sea port city is a vital lifeline for aid shipments to Yemen, the most impoverished country in the Arab world.

The UN has warned that any major fighting could halt the distribution of food to eight million Yemenis dependent on aid to survive.

Disruption to supplies coming through Hodeida could "cause starvation on an unprecedented scale", charity Save the Children said in a report on Wednesday.

An extra one million children now risk falling into famine as food and fuel prices soar, bringing the total to 5.2 million, the charity said.

- Claims over food warehouses - Brigadier General Ali al-Taniji, commander of coalition forces on Yemen's west coast, confirmed Tuesday that the alliance had launched an operation in Hodeida, in a statement to state media in the United Arab Emirates, Saudi Arabia's main partner in the coalition.

Speaking on condition of anonymity, a senior coalition official told AFP the operation was being fought on multiple fronts.

Residents in and around the city, home to 600,000 people, reported hearing explosions throughout Monday night.

"International food supply warehouses were targeted in Hodeida, a clear sign that there is a plan... to make warehouses and densely populated neighbourhoods legitimate targets," said the head of the rebels' Supreme Revolutionary Council, Mohammed Ali al-Huthi.

He also accused the international community of being complicit in the attacks, saying "tolerance of terrorism has only encouraged (the coalition) to plan and deliberately commit crimes".

A spokesman for the Saudi-led coalition did not respond to a request for comment, while a World Food Programme spokeswoman declined to say whether the UN agency's facilities had been hit.

Saudi Arabia and its allies accuse the Huthis of smuggling arms from Iran through Hodeida, a charge the rebels and Tehran deny, and they have imposed a partial blockade on the port.

UN envoy Martin Griffiths is due in Riyadh on Wednesday, having left the Yemeni capital Sanaa after a three-day trip.

Progress was made to resume consultations and confidence-building measures, including the reopening of Sanaa airport to commercial flights and the release of prisoners, the envoy's office said in a statement.

Griffiths is pushing for new peace negotiations after the Geneva talks failed to get off the ground, with the Huthis saying they had not received guarantees for their safe return home afterwards.

- Humanitarian flights -The UN has said it is working to open a humanitarian air bridge to transport Yemeni cancer patients abroad for treatment.

But the Huthis said plans to fly patients out of rebel-held Sanaa on Tuesday had been stopped by the coalition, accusing it of failing to cooperate.

World Health Organization spokeswoman Fadela Chaib told AFP there was "no date set for the first flight" pending "final approval from all parties".

While the rebels control the capital, Saudi Arabia and its allies control Yemen's airspace and have put Sanaa's international airport under blockade.

In wheelchairs and carrying sick babies, Yemenis in Sanaa lined up Tuesday outside the health ministry as rumours of the impending flight spread.

Ahmed Awad bin Mubarak, Yemen's ambassador to the UN, said his government was willing to "do whatever it takes to alleviate the suffering and pain of Yemenis", in a letter to Secretary General Antonio Guterres.

But he asked that the UN and all its branches not sign agreements "except with the legitimate, internationally recognised government of Yemen".

Saudi Arabia and its allies launched a major operation to retake Hodeida in June before announcing the pause for peace talks.

The troops, backed by coalition air strikes, have retaken a number of towns across Hodeida province but have not yet breached the city.

The Saudi-led alliance intervened in the Yemen conflict in 2015 in a bid to bolster embattled Yemeni President Abedrabbo Mansour Hadi, whose government is recognised by the UN, in his war against the Huthis.

Nearly 10,000 people have since been killed and the UN says Yemen is now facing the world's worst humanitarian crisis.

".Southern_. 3 hours ago
Glad that the war is moving on to the right place!"